The Polymath Prince of Physics & Math 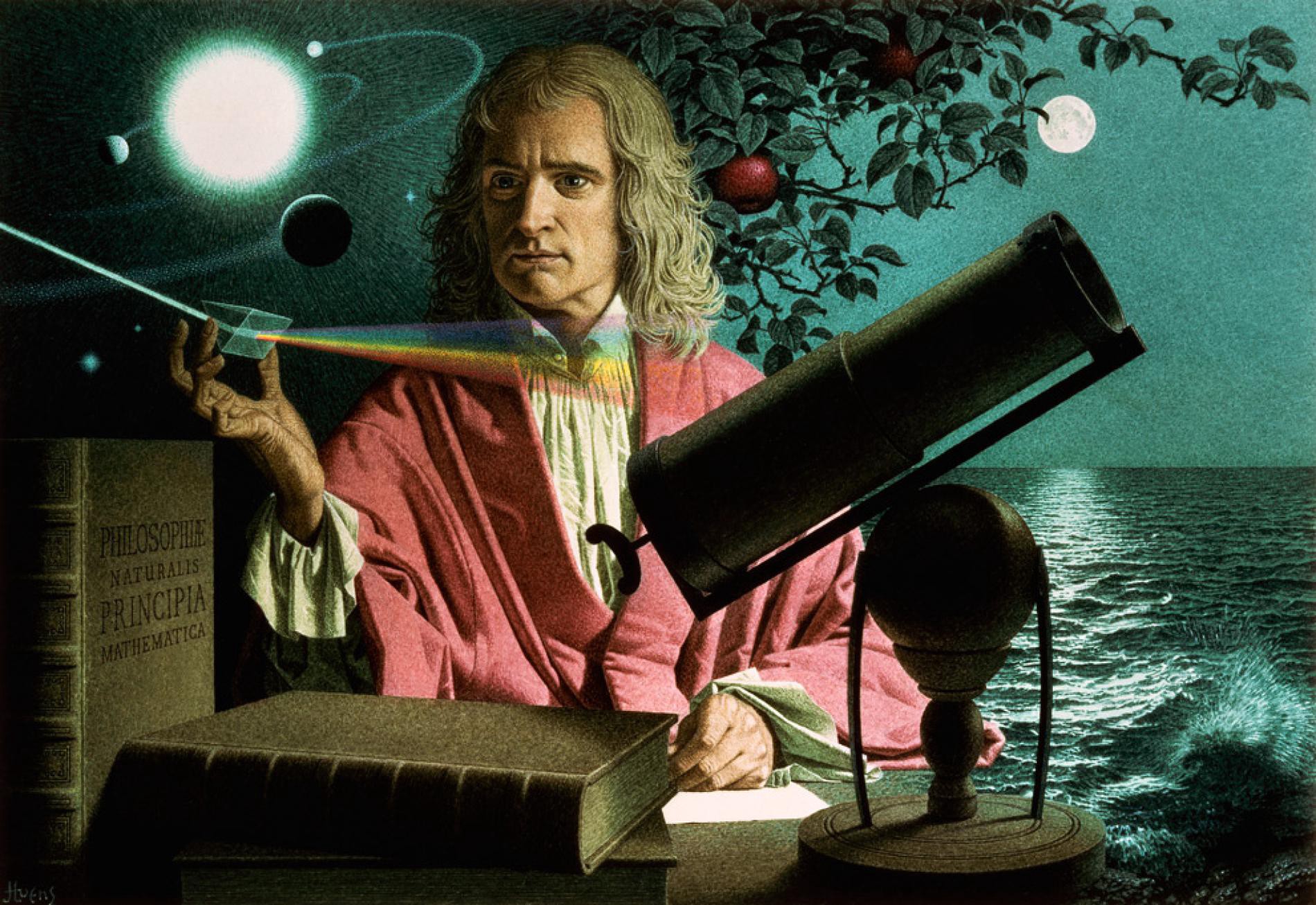 It’s nothing short of poetic irony that the now-well-known quote above was first spoken by none other than Sir Isaac Newton; it’s ironic, because, well, if there’s an identifiable giant that influenced the greatest discoveries & inventions of the 20th century, it’s incontrovertibly Sir Isaac Newton.

Few pioneers ever achieve the impossible by completely revolutionizing an entire field of academia — these select few, are almost always deep, life-long-dedicated, single-track experts. The historical anomaly, is, of course Sir Isaac Newton, who’s work is legendary in both math & physics. In this series of Masters of Many, next to perhaps Nikola Tesla, the lasting impact of Newton’s work is unmatched: it’s simply impossible to capture just how deeply Newton changed the world. Staying in the same lane as previous entries, we once again narrow the historical context to a single decade of his formative years, asking the question — what was he like in his twenties?

— Credited, along with Leibniz, with inventing & establishing the entire branch of classic calculus, the mathematical study of change

— Ground-breaking advancements in the field of optics such as inventing the reflecting telescope, studying white light & discovering the color spectrum

— Prolific author that published many lasting STEM books, such as The Principia, considered one of the single most important pieces of academic literature

With a father that passed away three months before his birth, Newton predictably had an emotionally & psychologically challenging childhood. As noted in both biographies & in his diary, his mother re-married & re-located with his new step-father — leaving Newton in the care of his maternal grandmother, Margery Ayscough. Evident by a note in his diary, Newton viscerally abhors his stepfather.

From the age of about twelve to seventeen, he was educated at The King’s School, Grantham. Of interest, he experienced a brief hiatus in 1659 when his mom, again remarried, succeeded in having him withdrawn & attempted to make him a farmer — an interest he strongly disliked. Fortunately, always a top-notch student, Newton had Henry Stokes, master at The King’s School, persuade his mother to send him back to school. In 1661, nineteen year-old Newton was admitted to Trinity College, Cambridge paying his way by performing valet’s duties (essentially a servant); he kept this occupation until he was awarded a scholarship in 1664, guaranteeing him four more years until he could get his MA.

At twenty-two, Newton begins writing in his legendary ‘Waste Book’ — the equivalent of Da Vinci’s sketch book. One of the very first few inscriptions includes his generalized binomial theorem, a clear precursor to larger math conquers (particularly calculus). In 1665, twenty-three year-old Newton attained his BA degree; shortly after, the university temporarily closed as a precaution against the Great Plague.

The next ~18 months are now regarded in academic circles as Newton’s Annus Mirabilis, which in Latin translates to the “miraculous year(s).” During this period of private work in Woolsthorpe, he intensely self-studied & laid the foundation for revolutionary breakthroughs in calculus, optics & physics. Two specific experiments highlight the importance of this period for twenty-four year-old Newton. First, it was in this year that Newton observed an apple falling from a tree, marking the beginning of his law of universal gravitation . Second, it was in this year that Newton observed that the spectrum of colors exiting a prism refracts different colors by different angles; this led him to conclude that color is a property intrinsic to light — a point which had been debated in prior years.

In 1667, twenty-five year-old returned Newton to Cambridge & in October was elected as a fellow of Trinity. The following year, Newton both completed his prototype of the reflecting telescope & was granted his Masters Degree from Cambridge.

Within a year of graduating, in 1669, twenty-seven year-old Newton is appointed Lucasian Chair of Mathematics at Trinity — a position he’ll hold for the next thirty-four years. Additionally, a draft of De Analysi, another famous precursor to his major break-through in calculus, sent is to John Collins.

The penultimate year in this mini-bio,1671, twenty-nine year-old Newton sends his reflecting telescope to the Royal Society & is shortly after nominated for admission.

1672, the year Newton turned thirty, he was formally accepted to the Royalty Society & subsequently published a flurry of papers on optics & colors. For better or worse, a bitter rivalry over his theories in optics started with none other than Robert Hooke; Hooke harshly, publicly, criticizes Newton’s letter on Light & Colors. Towards the closing of the year, Newton sends another letter to John Collins on methods of tangents — slowly but surely rounding out the key features of classic calculus.

As we’ve learned from previous submissions, people with Herculean strengths are always balanced out with tragic weaknesses. Newton doesn’t escape the clutches of our darker nature so we face the question — what quirks, rumors or controversies perturbed the polymath prince of physics?

First, it must be noted that Newton, perhaps better than any other figure in history (save Nikola Tesla), perfectly embodies the stereotype of the lone genius. For example, his most noteworthy stretch of productivity, his Annus Mirabili, was a glorious 18-months of purely isolated, autodidact work. Consistent with this theme of isolation, it’s well-noted that Newton had very few friends & almost zero romantic interests; in sharp contrast, while little is known of his positive social life, volumes exist on his bitter rivalries with both optics & math juggernauts Robert Hooke & Gottfried Leibniz. The cherry on top, much to the chagrin of an in-defenseless Newton, is an unconfirmed rumor that not only did Newton never married, but additionally he died as a virgin.

Parallel to his public isolation is Newton’s clearly-disturbed mental state of health. While it’s impossible to accurately diagnose in retrospect, many causes & symptoms exist that point to an (at-times) turmoiled existence. Documenting different bouts of depression, misery & paranoia throughout his life, it’s relatively little surprise given his brutal upbringing. Much like one (Bertrand Russell) of the two other troubled polymaths in this series, it’s a given that Newton’s father passing & his mother abandoning him had deeply lasting impacts.

Last but not least, more strange than a casting judgment, despite a once-in-lifetime rational mind, Newton explored the occult & supernatural multiple times throughout his life. For one, his efforts at alchemy are well documented — convinced that he could discover the Philospher’s Stone, a material that could produce infinite gold or a life elixir. In another instance, it’s reported that he mathematically analyzed the Bible, seeking deeper messages from the universe. Finally, of course, like other great English polymaths before him (Sir Francis Bacon & Bertrand Russell), there are the many bounding rumors of Newton joining & participating in one of the many prominent secret societies.

Who Was Isaac Newton In His Twenties? A hardened, once-in-a-century autodidact — a prodigious, independent individual with a fiery drive to unlock the secrets of the universe.

Was He Accomplished In His Twenties? Incontrovertibly. Particularly in retrospect, Newton accomplished a phenomenal amount of math, physics & optics work; however, due to this secretive nature, he didn’t publish the majority of this work till later in life — if he had, Newton would’ve undoubtedly been an academic celebrity in his twenties.

It’s impossible to aptly describe just how important Newton’s finding are to modern times; while Tesla, Da Vinci, Franklin & the many others undoubtedly changed the surface modern world, Newton revolutionized its infrastructure: it’s Newton’s foundation upon which the castles of 21st-century technology are built. At a time when the barriers-to-entry for a top-notch education have drastically decreased, it’s undoubtedly comforting to note that perhaps the greatest polymath of all time attained his place in history not with infinite resources & a privileged education, but rather with a library, a desk & a burning desire to understand our universe.