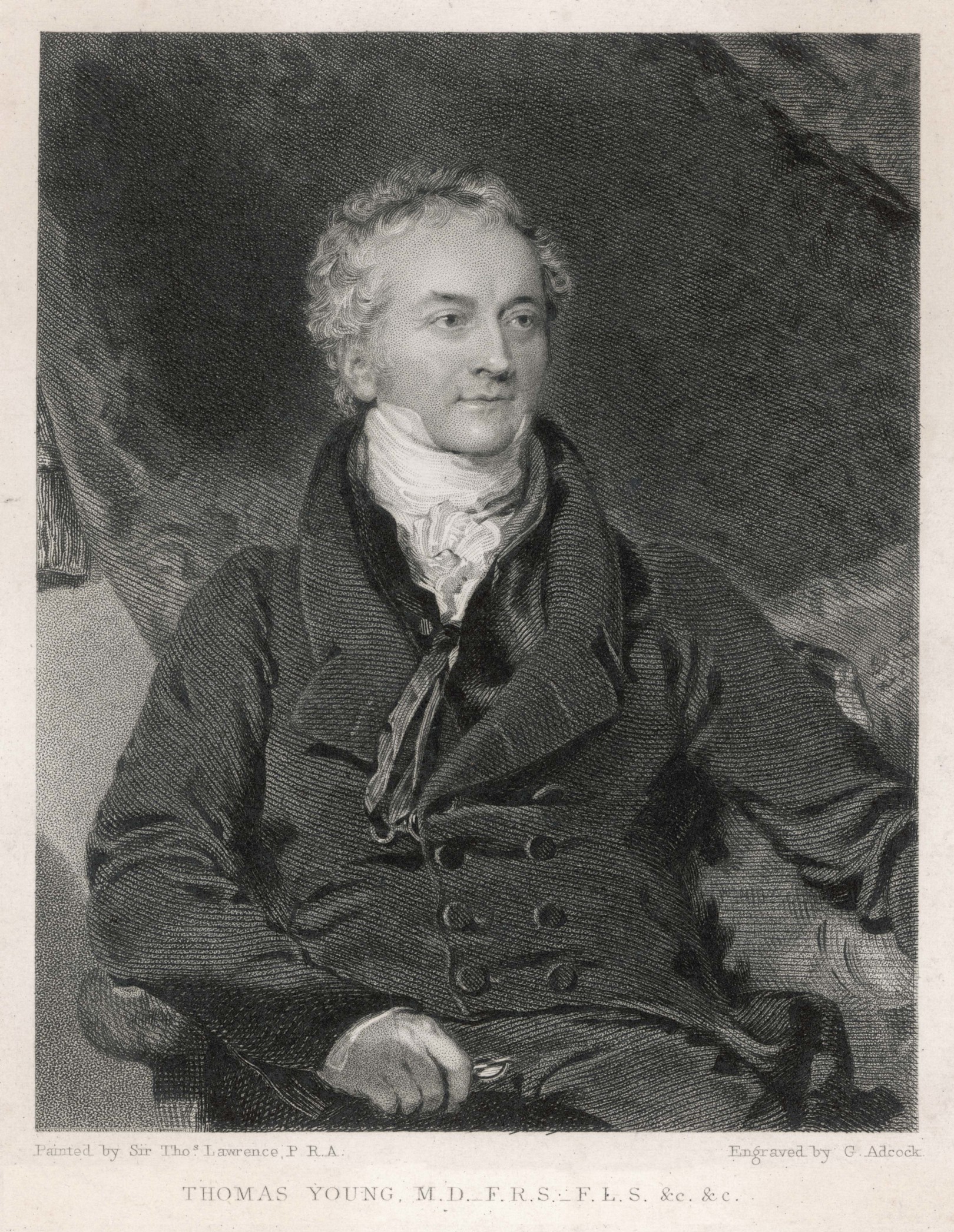 The fourth entry in this series of Masters of Many in their formative years lacks the mainstream popularity of our previous protagonists, especially relative to Da Vinci & Franklin; Thomas Young, however, nonetheless embodies the perfect portrait of a 20th-century polymath. Praised by the likes of Eisenstein, Asimov, & Maxwell, Young’s accomplishments are countless & impactful; as renowned author Isaac Asimov once claimed [of Young]:

He was the best kind of infant prodigy, the kind that matures into an adult prodigy

Young held a rare, feverish desire to learn & accomplish within; this tenacity in pursuit of knowledge, paired with his clearly-heightened, raw intelligence, led to a uniquely productive & prolific life.

Staying in context with the previous entries, let’s down narrow the historical peripherals to a decade of his formative years, asking the question— what was he like in his twenties?

— Established the wave theory of light through his double-slit experiment; first physicist to suggest that light is both a particle & a wave

— Significant contributions to the decipherment of Egyptian hieroglyphs, specifically the Rosetta Stone; lifelong polyglot with mastery of five languages

— Well-rounded Royal-Society physicist that made a dizzying amount of entries to the Encyclopaedia Britannica, ranging from vision, light, mechanics, energy (credited with the term itself), language & finally music

From birth, it was quite clear that Thomas Young held prodigious intelligence. At the early age of six, for example, he found the village school quite dull — so he was sent to a clergyman as a form of advancement. Young, in his autobiography, almost immediately voiced his continued frustration, stating that the clergyman “had neither the talent nor temper to teach anything well.”

Young spent only six more years in official learning institutions. By the time he left preparatory school in 1786, he was already knowledgeable in many languages (ancient & modern), as well as versed in Newtonian physics. At thirteen years old, bored with schooling, Young became a tutor to Hudson Gurney (grandson of David Barclay); he remained here from 1787 to 1792. Lifelong friends, Gurney observed that Young:

A classic display of his lifelong perseverance, by seventeen Young powered through nearly all of the major writes on antiquity (Aristotle, Plato, Newton, etc..) in their original tongues. Newton’s Opticks, in particular, sparked a lifelong interest in the concept of vision, the mechanics of light & the anatomy of the eye. He began to study medicine in London at St Bartholomew’s Hospital in 1792; additionally, he enrolled as an assistant pupil at the hospital. Required to dissect an ox’s eye, he began jotting down a flurry of ideas & experiments…

Young wastes no time implementing a life of prolific productivity— the year 1793, as a twenty year-old, he submitted his very first publication to the Royal Society of Long: Observations On Vision. Based on this dissertation, at the unusually young age of twenty-one, Young was elected a fellow of the Royal Society.

A short two years later, after transferring again, twenty-three year-old Young obtained the degree of Doctor of Medicine from the University of Göttingen in 1796.

Th next year, due to regulatory requirements set by the Royal College of Physicians, Young discovered that he’d have to repeat a few years of medical school in order to attain an MD & become a practicing physician in England; he, therefore, enrolled once last time at Emmanuel College, Cambridge This same year (1797), at twenty-four, Young suddenly found himself financially stable as he inherited the estate of his grand-uncle Richard Brocklesby.

At twenty-six, Young established himself as a physician & officially opened a proprietary place of practice at 48 Welbeck Street, London (seen below). His primary interest at this time consisted of sensory perception & the anatomy of the eye.

In 1801 Young, continuing his flurry of publications, published one of his most legendary pieces: On the Theory of Light and Colours. This ground-breaking dissertation contained not one, but two monumental theories. First, he presented a wave theory of light using the wavelength of different colors of light using diffraction (preceding his double-slit experiment). Next, he put forth the theory of three-color vision to explain how the eye could detect colors — a theory that today we know is very true given the three types of cones located in the retina. To round the year out, at twenty-eight, Young was appointed professor of “natural philosophy” (basically physics) at the Royal Institution.

In 1802, twenty-nine year-old Young was appointed foreign secretary of the Royal Society. The following year (1803), the closing year of this introspection, our hero broke a commitment & resolved to enter another, lifelong one. At thirty, Young resigned from his professorship at the Royal Institution, claiming that he feared that its duties would interfere with his medical practice (it’s much more likely that he simply found the professorship distracting from his many experiments). This same year he met one Eliza Maxwell, his lifelong sweetheart that he’d soon marry.

People with enormous strengths tend to balance this out with tragic weaknesses. As we’ve seen with previous protagonists, every bright light casts a shadow; so, the question follows — what shadows followed Thomas Young?

An overlap of a quirk & controversy, a negative association attributable to Young was his rather experimental, unorthodox, & at times arguably in-humane physician practice. It’s well-known that Young, in his brilliant rebelliousness & intellectual independence, strongly disliked traditional medical methods; he therefore often turned to untested & experimental methods for treatment. As a lover of science & history observing Young’s accomplishments centuries later, his physician methods intrigue me; as a patient in the 1800s in dire need of a serious ailment, however, the kooky physician revered for his physics & wide-ranging experiments didn’t exactly inspire trust.

This apathy towards his physician career, while it undoubtedly opened up his bandwidth for pursuing his many interests, naturally led to a mediocre commercial track record. Had Young not inherited his Uncle’s estate, it’s highly likely that Young would’ve either ran into serious financial issues or, arguably worse, would’ve curtailed his rapidly expanding knowledge.

Additionally, as well-rounded as Young was, he was famously infamous for being quite the poor communicator. His tenure as professorship, for example, leaves a few hints that perhaps Young didn’t leave as much as he was asked to resign; during the first two years of his lectures, it’s recorded that his teachings were very technical, contained too much breadth, &, of course, consisted of his latest home-experiment results. It was said by one of his contemporaries, George Peacock, that:

His words were not those in familiar use, and the arrangement of his ideas seldom the same as those he conversed with. He was therefore worse calculated than any man I ever knew for the communication of knowledge.

Who was Thomas Young in his twenties? A genuine workhorse genius infatuated with medicine, physics, & the best of both worlds: vision, optics & the eye.

Was he accomplished in his twenties? Yes. Out of the four protagonists summarized, Young maintained a surreal consistency in productivity seen from an early childhood that extended much past his twenties. Though, as noted above, many of his scientific breakthroughs were only possible due to the financial stability he inherited.

Nearing his thirties, Young was on the cusp of his arguably greatest contributions (the double-slit experiment & the Rosetta Stone decipherment). His pace in publications, experiments & contributions rarely waned as he aged; & his scope in topics calling his interest, it seemed, only expanded over time. Reminiscent of other intellectual rebels that carved their own path, I’d like to highlight a lesson Young lived out: refuse to let academia & traditional paths overshadow your education. Your absolute best work will come from aligning multiple purposes, skillsets, & interests, all characteristics very personal to you — find a way to create your own path to that sweet spot, it’s hardly one that’s already been walked. Yes, Thomas Young is certainly no-where a household name as Benjamin Franklin or Leonardo Da Vinci, but leave all doubts at the door, Thomas Young is vastly underappreciated as a 20th-century universal genius.

The Last Man Who Knew Everything: Thomas Young