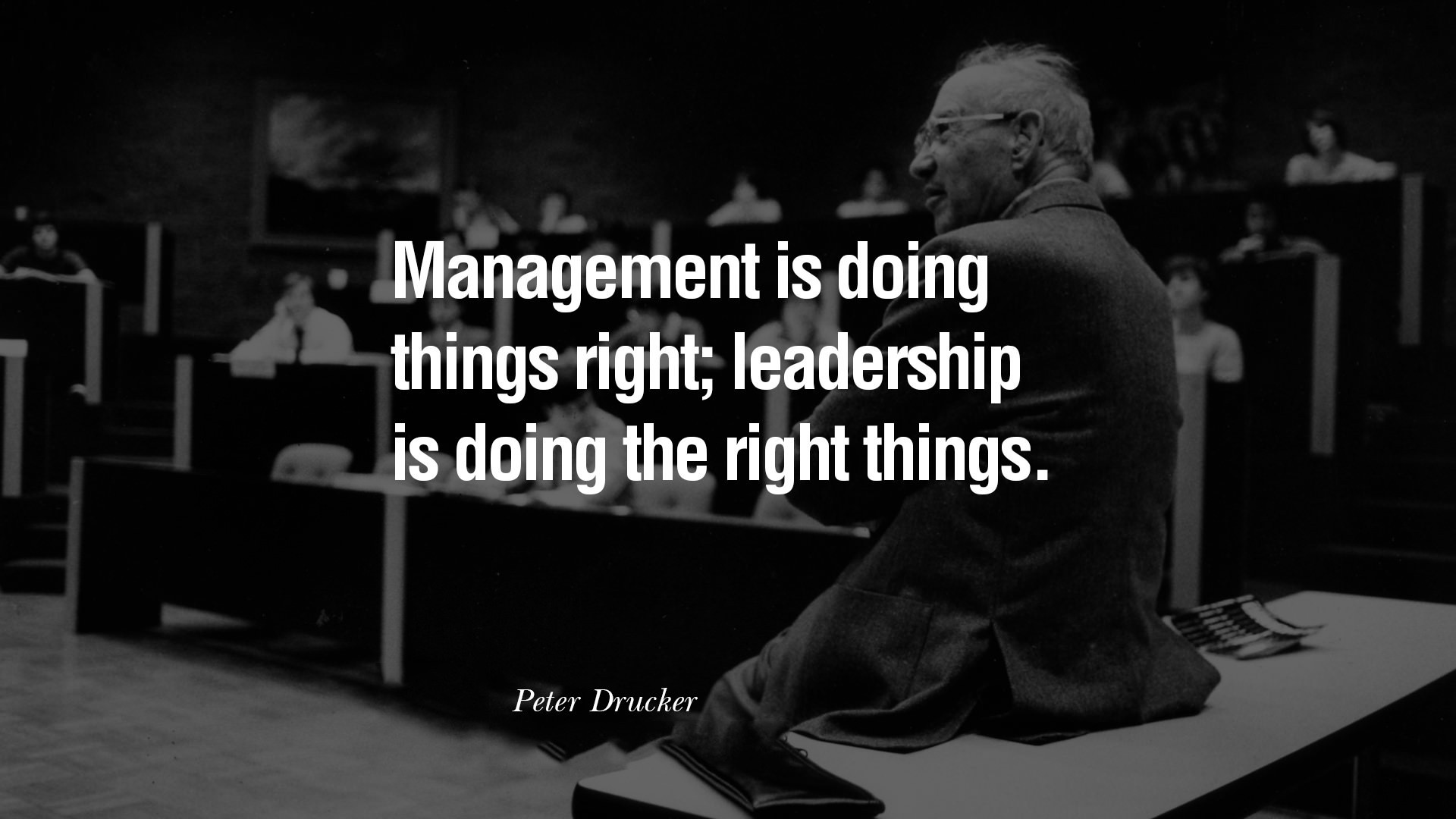 Most books deal with managing other people; this book is about managing oneself for effectiveness. It’s not proven that one can truly “manage” another human — but one can always manage oneself. After all, management is almost entirely by example.

Executives are paid to be effective; yet, it’s far from natural. All the great ones had to learn it, then make it a habit.

Assuming raw talent is equal, the only thing that differentiates a successful & failed executive is effectiveness. The best execs follow the following habits.

I. Effectiveness Can Be Learned

To be effective literally means getting the right things done; only effectiveness converts intangibles like intelligence, imagination & knowledge into results. Contrary to popular belief, whether you manage or not doesn’t dictate whether you’re an executive; every knowledge worker is an exec if by virtue of his/her position or knowledge, he/she is responsible for measurable contribution. Unfortunately, every exec has zero control of the following realities:

Reality “1” should be fairly obvious. Reality “2” highlights the fact that unless execs take positive action, such as develop filters or criteria, they are at the mercy of the flow of events. Reality “3” & Reality “4” reveal uncontrollable facts of organizations both internally & externally, respectively. By being within an organization, an exec’s output is immediately dependent on others; his/her work is only effective if others make use of the contribution. By being within an organization, an exec sees inside results as reality, yet the only results that matter exist in the outside environment.

Effectiveness is a habit that needs to be practiced. So if you’re not an effective exec how do you become one?

Time is the limiting factor; therefore managing time is the foundation of effectiveness. Humans are inherently ill-prepared to handle time, so measure your time, do not rely on memory. To make use of time effective, an exec needs time in large, & uninterrupted units of time(usually 90 mins).

Next, an exec will implement a systematic time management criteria; this will help find all non-productive, time-wasting activities.

The last step is to quickly eliminate time-wasters which fail criteria, then proceed by staying alert for over-staffing symptoms, mal-organization issues, & malfunctions in information flow.

The exec must possess to courage to not be scared of over-pruning — as humans we tend to overrate rather underrate our importance.

III. What Can I Contribute?

Always Be Asking: “What Can I Contribute?”

Nearly all execs are occupied with efforts rather than results — yet to be effective, one has to focus on contribution & outward goals. The exec who focuses on business & downward authority is a subordinate; but the exec who focuses on results takes responsibility, regardless of position, is in the most literal sense “top management.” He/she holds him/herself accountable for the performance of the whole. Every organization, similar to every organic structure, needs performance(nutrition) in three major areas:

People will hear what they expect, not what they’re being told. This makes downward relationships nearly impossible: the harder the superior tries to say something to his subordinate, the more likely it is that the subordinate mishears. By holding himself/herself responsible, he/she communicates the same responsibility to the subordinate through example.

Ask: “Who has to use my output for it to become effective?”

People grow according to the demands they make on themselves.

A word must be said here on meetings — most meetings are time-wasters. In order for execs to make meetings productive, they take the following steps:

No Such Thing As A “Good Man,” Good For What? Is The Question.

The effective exec makes strength productive. An exec can literally do nothing with a colleague’s weaknesses, he/she should therefore always optimize all available strengths. The exec first encounters the challenge of employing strength in staffing. As history tells, whoever tries to staff to avoid weakness will end up at best with mediocrity; well-rounded men lose to a team of single-purpose men again & again. An exec cannot staff to minimize weakness; he/she must aim to maximize strength.

If to focus on strength is to make demands for performance, then why do most execs not staff for strength? Primary because the immediate task of the exec is not to place a man, but to fill a job. This naturally leads to looking for the “least misfit” — thereby employing to avoid weakness. Some would advise that the solution is to structure jobs to fit the personality, this however, is worse. Jobs in an organization are inherently interdependent & interlocked, this means that they must be objective; that is, determined by task rather than personality.

Effective Execs Staff With These Four Rules In Mind:

The only way an exec can let a subordinate discover their potential is by assigning a task whose scope allows for massive, continuous growth both vertically & horizontally. A subordinate can only discover his/her maximum potential by employing strength; therefore, for a superior to focus on weakness, is useless. All one can & should measure is performance, so how does one correctly appraise personnel? By focusing on their strengths:

Staff with a focus on opportunity, not on problems; this not only creates effective organization, but it also creates enthusiasm & dedication. Every personnel decision is a gamble; but by basing it on what a man can do, it at least becomes a rational gamble. Most of all, effective execs lead from strength in their own work; they make productive what they can do. Don’t complain about what you can’t do; maximize what you can do. Equally important, the effective executive tries to be himself.

If’s there one “secret” to effectiveness, it’s concentration — do first things first & do one thing at at time. Today is always the result of actions & decisions taken yesterday — and so, an exec is always bailing out the past.

The first rule therefore, for the concentration of execs is to slough off the past that isn’t productive. In fact, the default assumption should be that all programs outlive their usefulness fast & should be scrapped unless proven productive & necessary. This is the only way to force way for the new; social organizations need to stay & muscular as much as biological organisms

The real question is who’ll make the decision- the exec or the pressure? Pressure always favors yesterday, pushes off opportunities & focuses on the inside.

The secret to concentrate is not to set priorities, but to set post-eriorities, meaning, decide what tasks not to tackle. The most important thing about priorities/posteriores is not analysis but courage — because a post-eriority is always someone’s priority.

Concentration — that is, the courage to impose on time & events his own decisions as to what really matters & comes first — is the exec’s only hope of becoming the master of time & events instead of their whipping boy.

VI. The Elements of Decision-Making

To make decisions is the specific task of the exec. Effective execs don’t make a great many decisions; they concentrate on important ones. All effective execs tackled a problem at the highest conceptual level of understanding; they thought through what the decision was all about, & then tried to develop a principle.

The Elements of An Effective Decision Process Are:

“A country with many laws is a country of incompetent lawyers”

One of the most common mistakes execs commit is to treat a generic situation as if it were unique; effective decision-markers, therefore, always assume that a problem is generic. Effective execs don’t make many decisions, they make generic solutions — the generic always has to be answered through a rule, a principle.

The next step, is to preemptively ask: “What Are The Objectives?” This will help set the boundary constraints & purpose that this decision, in order to be effective, needs to serve. This frame of reference is critical particularly in fast-moving industries — if the grounds change, recheck the boundary conditions.

Setting these boundary constraints ensures that one is ready to compromise, adapt& concede processes & resources before it’s necessary.

While setting the boundary conditions may be the most difficult step; implementing the decision is absolutely the most time-consuming step. In fact, no decision has been made unless carrying it out in specific steps has become someone’s working assignment & responsibility:

Ultimately, decisions are made by men which means their inherently fallible — to go oneself & look back at the results is the only reliable feedback. Not because an exec distrusts his/her team, but because he/she distrusts communications.

Ultimately a decision is a judgement; a choice between alternatives. As anyone knows, alternatives are almost always biased. In fact, to get the facts first is nearly impossible; to determine what is fact requires one to first make a decision on the criteria of the relevant. After all, no one has ever failed to find the fact that he/she is looking for.

The effective exec first assumes that the traditional measurement is not right or else there’d be no need for a decision; yesterdays metrics reflect yesterdays decisions. Yet finding the appropriate measurement prior to implementing a decision is not a math excersice but a risk-taking judgement. But in order to have options, you need disagreement — so in the face of many managerial books, create productive disagreement.

Every decision is like surgery; it carries risk. Don’t do unnecessary surgery.

Conclusion: Effectiveness Must Be Learned

Two Promises Make Up This Book:

The Steps To Becoming An Executive Are: