The Only President Who Was Never President 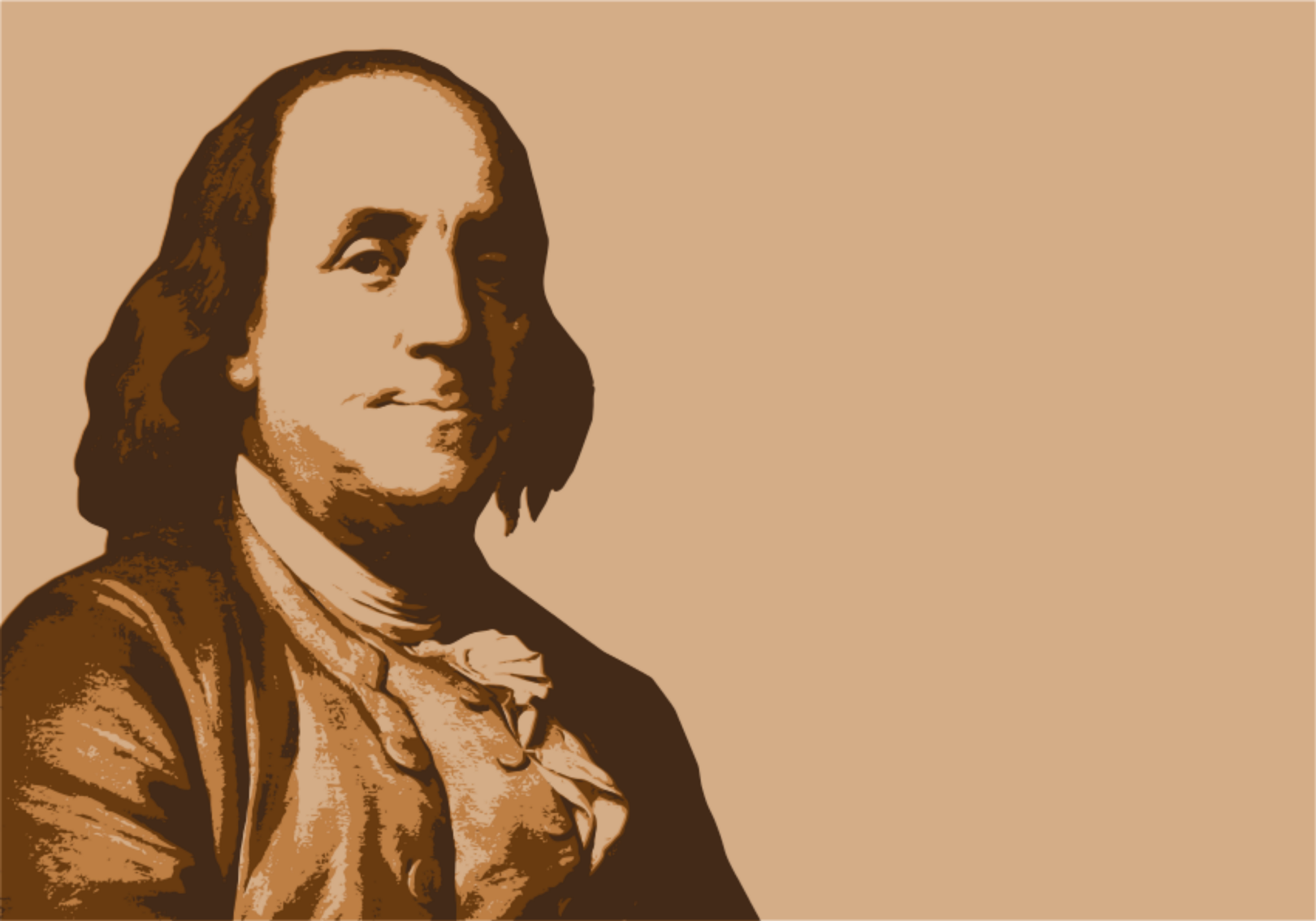 If you live on the American side of the great pond, then this is surely a man that requires little introduction. One of the legendary Founding Fathers of our beloved United States, Benjamin Franklin undoubtedly qualifies as an accomplished polymath. Considered a statesman, author, entrepreneur, scientist, & publisher, it’s undeniable that he accomplished an absurd amount spread across a plethora of wide-ranging topics.

So what was he like in his earlier years — say, his twenties?

As the first American polymath, Benjamin Franklin is an absolute tank of a figure worth studying as a Master of Many. Below are just a few of his critical contributions to mankind.

— Only Founding Father to have signed all four documents establishing the USA: Declaration of Independence (1776), Treaty of Alliance with France (1778), Treaty of Paris (1783) & the Constitution (1787)

— Invented a gamut of pragmatic, consumer products ranging from the Franklin stove, to bifocal eyeglasses, to swimming fins, to an early version of a catheter

If it’s true that history thrusts greatness upon individuals, then she surely skipped Benjamin Franklin in his earlier years. Granted, he had demonstrated remarkable wisdom & a wicked sense of cleverness through his Silence Dogood character. However, in general, the years before his twenties were hardly marked by anything spectacular; right before he turned twenty, he was technically a fugitive that had been arguably duped into finding himself in London. There, he worked as a typesetter in the printing shops of Samuel Palmer & John Watts — soaking in all that he could that about the printing & publishing business.

Franklin turned twenty in the year 1726. The most notable event during this kickoff year was his journey back across the Atlantic — returning back to America & settling in his own fixture of Philadelphia. The next year, 1727, at twenty-one a spark of his future statesman ambitions glowed as he organized the Junto, or Leather Apron Club, which was a weekly meeting of men focused on debating debate questions of morals, politics, philosophy & business affairs.

It wasn’t until the following year(1728) later, at age twenty-two, that he entered a partnership with one Hugh Meredith; with a loan from Meredith’s father, the two set out to establish a printing shop.

The printing business became highly successful, producing paper materials ranging from public pamphlets, to books, & currencies. Despite his prospering business, however, the year 1729 (now twenty-three) marks one of increasing complexity in his personal life. For starters, he officially became a father out of wedlock with his first son, William; this alone was a large source of controversy as William’s mother was never known — rumors persisted that the mother was a prostitute which led to Benjamin keeping her identity a secret his entire life. Next, he started a flourishing romantic relationship with another woman recently abandoned that, due to bigamy laws, he couldn’t technically marry. It was also towards the end of this year that he started expanding his publishing business, mainly by purchaing the colonial newspaper, the Pennsylvania Gazette.

During the following year, 1730, at the ripe age of twenty-four his business & literary ambitions very rapidly scaled. First, he secured his first, rather large, public contract as the Pennsylvania Assembly elected Franklin & Meredith as official government printers. Next, with public contracts, a printing shop & a colonial newspaper all under the same umbrella, Franklin recognized that he was primarily driving the business: so he decided to buy out Hugh Meredith, leaving him a sole proprietor. This same year he concluded his collection of his unorthodox family & moved in with his common-wife, Deborah Williams, & their illegitimate son, William Franklin.

The year 1731 witness Franklin’s rising civic & statesmen ambitions as it’s marked by not one but two community-driven events. Shrouded by secrecy, a key event that incontrovertibly fueled Benjamin’s life-long dedication to stewardship, enlightenment, & community occurred this year: he was tapped into & joined the legendarily mysterious Freemasons society. For the remainder of his life, he’d remain an active Freemason — & not simply a lower-level member, as evidenced by his rapid rise in ranks. Second, with the ideological & financial backing of his now-popular Junto club, Franklin established the Library Company of Philadelphia — which chartered the very first public library in his city. At the age of twenty-five, it was starting to become evident that Benjamin Franklin would leave a tremendous impact in the early colonies. Still minding his growing business, Franklin rounded the year out by partnering with one Thomas Whitmarsh, which resulted in his literary entity now spanning across a second colony (South Carolina).

At twenty-six, the year 1732, he further cemented both his personal & business legacies. On the familial side, he & Deborah gave birth to their first son Francis Folger Franklin. In terms of his expanding literary empire, this year marked the very first edition of the highly-popular Poor Richard’s Almanack; from 1732 to 1758, the yearly almanac sold exceptionally well throughout the colonies.

The years 1733–1735 were relatively quiet given the accelerating pace of his activities in previous years. At twenty-eight, a mere four years after he first joined, again highlighting his mercurial rise in organizations, he was awarded the highly-coveted title of Freemason Grandmaster. At twenty-nine he, unfortunately, experienced a heavy family tragedy as his elder brother, James Franklin, passed.

The final year of this summary, 1736, the year Franklin turned thirty, is once again marked by an energetic flurry of output. For one, his civic & community ambitions flourished — first, he was appointed Clerk of the Pennsylvania Assembly (main body of government at the time). Next, again backed by members of the Junto, he founded the Union Fire Company of Philadelphia (establishing the city’s first fire station). Unfortunately, this year ended with a personal tragedy: Francis Folger Franklin, Benjamin & Deborah’s son of four, died of smallpox.

No complete portrait of a man or woman, despite a demigod level of accomplishments, maintains a perfect gloss — there is no such thing as absolute morality, & Benjamin Franklin is no exception to this universal rule.

Thankfully, many of Franklin’s quirks have lasted the test of time, mainly due to his autobiography & Poor Richard’s Almanac. Among these, worth an extra read are his daily “air baths” (hint: just strut around naked) & his self-imposed values experiment.

Did Franklin ever contain or display darker characteristics? The moments were far & few, assuredly, however, it’s undeniable that he did. One quality that persisted throughout his life was his very modern & open-minded perspective on sexual liberation. When he fathered an illegitimate child in his early twenties, far from the last, that was the first lack of judgement sexually. Throughout his life, rumors revolving around his libido never ceased & in fact increased as he aged. From attempting to seduce a friend’s mistress (James Ralph), to frequenting whorehouses in Europe, to publishing an overtly-grotesque letter “On Choosing a Mistress,” it’s fair to say that his libido crossed a socially-accepted level. In fact, in his own words, through his autobiography, he left us the following admission: “the hard-to-be-governed passion of youth had hurried me frequently into intrigues with low women that fell my way.”

Slightly more tragic, a second surprising point of conscious darkness stems from his estranged relationship with his illegitimate child, William. If the apple doesn’t far from the tree then William is a clear exception that fell in an entirely separate farm. The more they aged, the larger their differences in life philosophy scaled as well — while Franklin very much embodied the core values celebrated in American history today, William found himself more & more aligned with the old society: England. During the Revolutionary War, this schism in ideology became quite tangible as William, a colonial Governor of New Jersey at the time, stayed a steadfast Loyalist to England. His position eventually led to his arrest by the Patriots — only resolving his commitments to the crown. Following imprisonment, from his base in New York, he organized military units to fight on the British side. Following the surrender at Yorktown in 1781, he went into exile to Britain. While he attempted to reconcile his relationship with his now estranged father after the war, Franklin, frankly, was having none of it. History tells us that they never made up — they met up only a single time afterward in London, in which records show that the meeting was terse, brief, & involved mainly tying up legal matters. Benjamin never spoke to his exiled son again, a bit surprising for the man whose legacy rests so much on his genuine care & stewardship for his immediate society.

Who was Benjamin Franklin in his twenties? A dedicated leader of his communities & a literature entrepreneur with a penchant for charm, cleverness, & stewardship.

Was he accomplished in his twenties? Absolutely. Starting & scaling a printing press in the early colonies was no easy feat; add in founding or participating in multiple communities (Junto, Freemasons, Library, & Firestation) & it’s evident that Franklin indeed displayed great promise early-on.

But looking at his lifespan of accomplishments it’s also clear that Franklin's story had just begun. Two of his arguably most note-worthy periods of accomplishments, his many breakthroughs as a scientist/inventor & his many pivotal roles in Founding America moments, are missing from his twenties. The trajectory is clear but his journey was far from over, so take that lesson with a grain of salt: it’s okay if you’re not a billionaire, Thiel Fellow or Harvard Business School graduate — move at your own pace. Our Founding Father was far from the historical figure he’d become in his mid-twenties, so don’t stress about accomplishing now, stress about who you’re becoming now.