Art & Engineering, All Under One Purpose 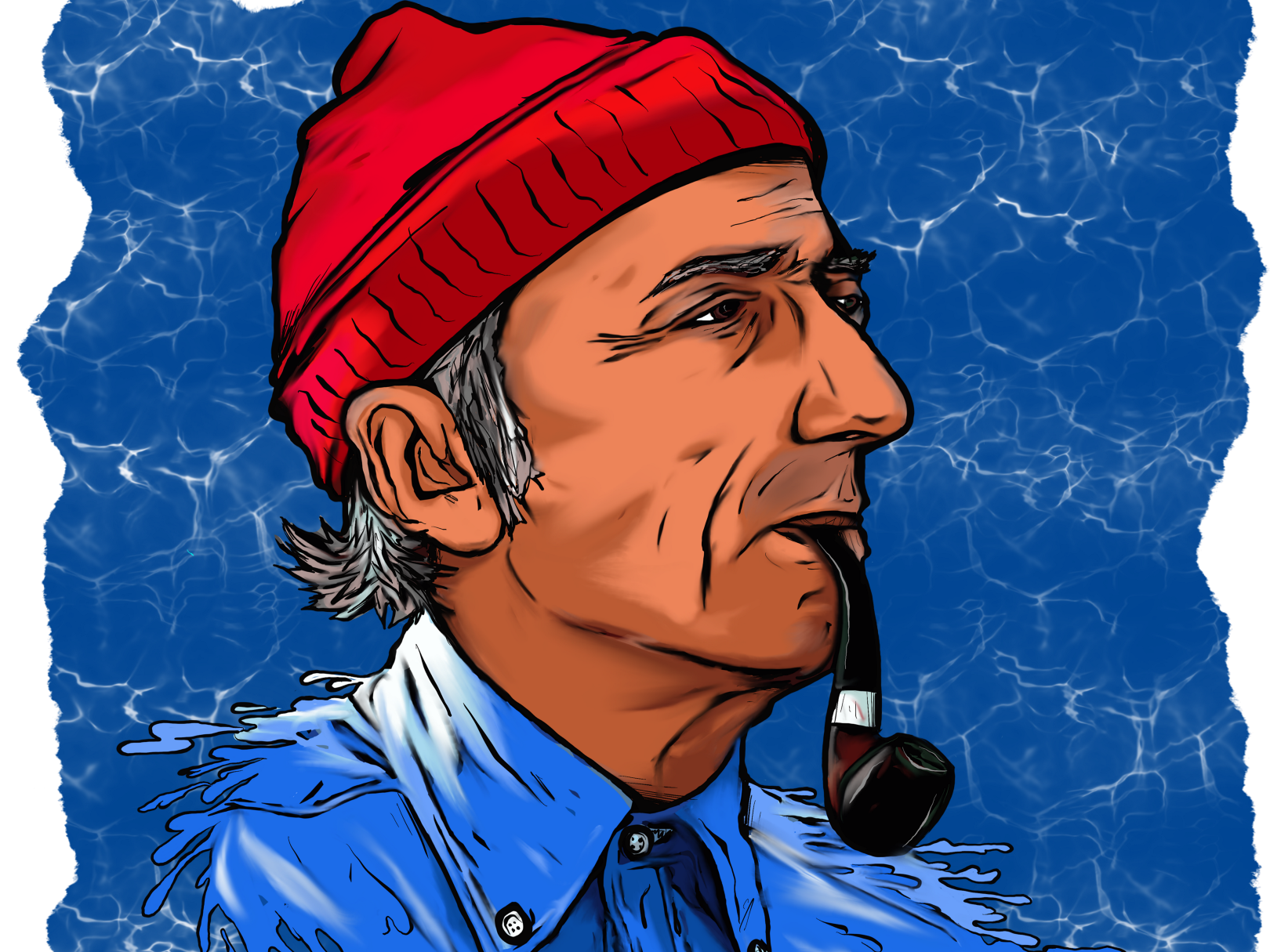 The Sea, Once It Casts Its Spell, Holds One In It’s Net Of Wonder Forever

Covering 70% of Earth’s surface, the ocean, despite our preference for land, remains the largest habitable ecosystem on our planet. Yet among the many polymaths we’ve now covered in this series, not one of them dedicated him or herself to water & its omnipresent properties.

Our eighth in this Masters of Many series is none other than the Sea King himself, the enigmatic Jacques Cousteau. With an origin story similar to that of comic book heroes, he led an exceptionally purposeful & productive life; despite wrapping all of his accomplishments within a marine-based topic, Cousteau undeniably portrays the range of polymaths like others in the series. We’ll maintain that same focus by zoning in on a specific time-period — what was he like in his twenties?

During his teenage years, an energetic Cousteau was expelled from a French high school for breaking the school’s windows with rocks. A bored troublemaker, he loved mechanical pursuits yet seemed completely disinterested in school. In retaliation by his parents, he was sent to a military-style academy near the French-German border. He went on to graduate in 1929 from the Collège Stanislas in Paris, unsure of what career he wanted to pursue — he eventually deciding on joining the Navy to experience world travel.

At twenty, in 1930, after passing a rigorous entrance exam, he was accepted into the Ecole Navale, the French Naval Academy. Here, he spent the remainder this year as well as the next (1931 & 1932). While attending the academy, Cousteau certainly filled his sense of wanderlust — a majority of the time sailing around the world on a training ship called the Jeanne D’Arc. Still unsure about his professional career, he slowly gravitated towards the idea of navigating the skies.

At twenty-three, in 1933, he graduated second in his Navy class & was promptly promoted to second lieutenant. As his first assignment, he was sent to a naval base in Shanghai, China to survey & map the countryside. Still on assignment at twenty-four, he finally committed himself to the single trajectory that he believed aligned his personal & professional needs: aviation.

Finally back home, at twenty-five Cousteau re-enlisted & started training to become a naval aircraft pilot — his path set before him.

As history shows us, however, destiny wasn’t convinced: at twenty-six Cousteau faced a traumatizing, nearly fatal experience. Driving too fast on a bend, his car disconnected from the road; he awoke to find partial paralysis on his right side & over a dozen broken bones (including both arms). The hospital diagnosis was equally morbid as the on-call surgeon recommended amputating Cousteau’s right arm (he refused). A slight light of ray throughout a deeply-turbulent time, Cousteau met the love of his life, Simone Melchior, this same year.

Due to the severity of the accident, his dream-piloting career was crushed. Devastated & depressed, twenty-seven year-old Cousteau underwent multiple months of physical therapy. Swimming daily to strengthen his arms, he improvised a pair of swimming goggles from aircraft pilot goggles & swam down to explore the seafloor. The beauty of the seafloor, its flora & its fauna, made a lasting impression upon him; literally feeling more free & complete underneath the surface, it was at this moment that he fell in love, marveling at the variety & beauty of undersea life. He later wrote in The Silent World :

One Sunday morning…I waded into the Mediterranean and looked into it through Fernez goggles…I was astonished by what I saw in the shallow shingle at Le Mourillon, rocks covered with green, brown and silver forests of algae and fishes unknown to me, swimming in crystalline water…Sometimes we are lucky enough to know that our lives have been changed, to discard the old, embrace the new, and run headlong down an immutable course. It happened to me at Le Mourillon on that summer’s day, when my eyes were opened on the sea.

While our hero rose from the ashes professionally, he also progressed his personal life: he & Simone married & moved to Sanary-sur-Mer.

The next year, 1938, twenty-eight year-old Cousteau & Simone gave birth to their firstborn, Jean-Michel. A second son, Philippe, was born in 1939. Around this time, the new family’s tranquil life on the edge of the sea was unfortunately threatened by world events. France began preparing for war, & Cousteau was promoted to gunnery officer aboard the Dupleix. The war was largely limited to ground action, however, & Germany quickly overran the ill-prepared French Army.

Living in the unoccupied section of France, thirty year-old Cousteau continued his experiments; it was during this closing year that a glimpse of his coming marine-mechanical conquests first surfaced. His first invention, which succeeded at depths up to 20ft, focused on designing & making the first underwater, waterproof camera.

As always, it’s healthy to peel the curtain back past the norm & seek out the flaws in the seemingly-perfect. It’s unfair to hold anyone to an immaculate standard, including our heroes. So once again we ask: where is the shade of darkness in Jacques Cousteau timeline?

As it turns out, the jovial mariner in the red beanie displayed a questionable sense of morality more than once; three separate themes surfaced during the research into his rumors & controversies.

It is not very much fun for Simone, but no suitable apartment will become available until we have booted out all the vile yids who are burdening us.

Next, is the clearly hypocritical fact that the so-famed environmentalist actually mistreated & killed multiple sea creatures while staging scenes for his films (as penned by his son). It’s claimed, again by his son, that:

For him the ends sometimes justified the means. Isn’t the important point that, at the end of the day, he served the cause of animals?

Last but not least, it was revealed, after Simone’s death, that darling-family-man Jacques Cousteau actually had a second, entirely-secret family. With two children in this second family, eventually, Jacques married his longtime mistress, Francine Triplet.

Who was Jacques Cousteau in his twenties? A mechanically-curious Naval officer searching for his greater purpose.

Was he accomplished in his twenties? No. Though he receives a few brownie points for his early marine invention. It must be noted that his mid-to-late twenties were unfairly interrupted by the colossal car crash — he might not have been commercially successful (yet), but his fortitude in the face of a fatal accident perfectly captures the man he was quickly becoming.

With his origin story taking place between the ages of twenty-six to twenty-seven, the enigmatic Sea King was indeed a late-bloomer (his first big success, inventing the aqua-lung, at 33/1943). While always mechanically-inclined, it’s really Cousteau’s rapid sense of acceptance during this near-fatal accident that inspires. Completely healthy, or partially paralyzed, we all have a calling waiting — a purpose that aligns our personal wishes with our professional needs. Unlike Da Vinci or Feynman, with once-in-a-generation artistic & academic talent, Cousteau proves it’s entirely possible for an average mortal to accomplish the superhuman — as long as one stays scanning the horizon. It’s cliche but Cousteau proves it outright: no work is better than work you love doing.