The Greatest Professor & Physicist Since Aristotle 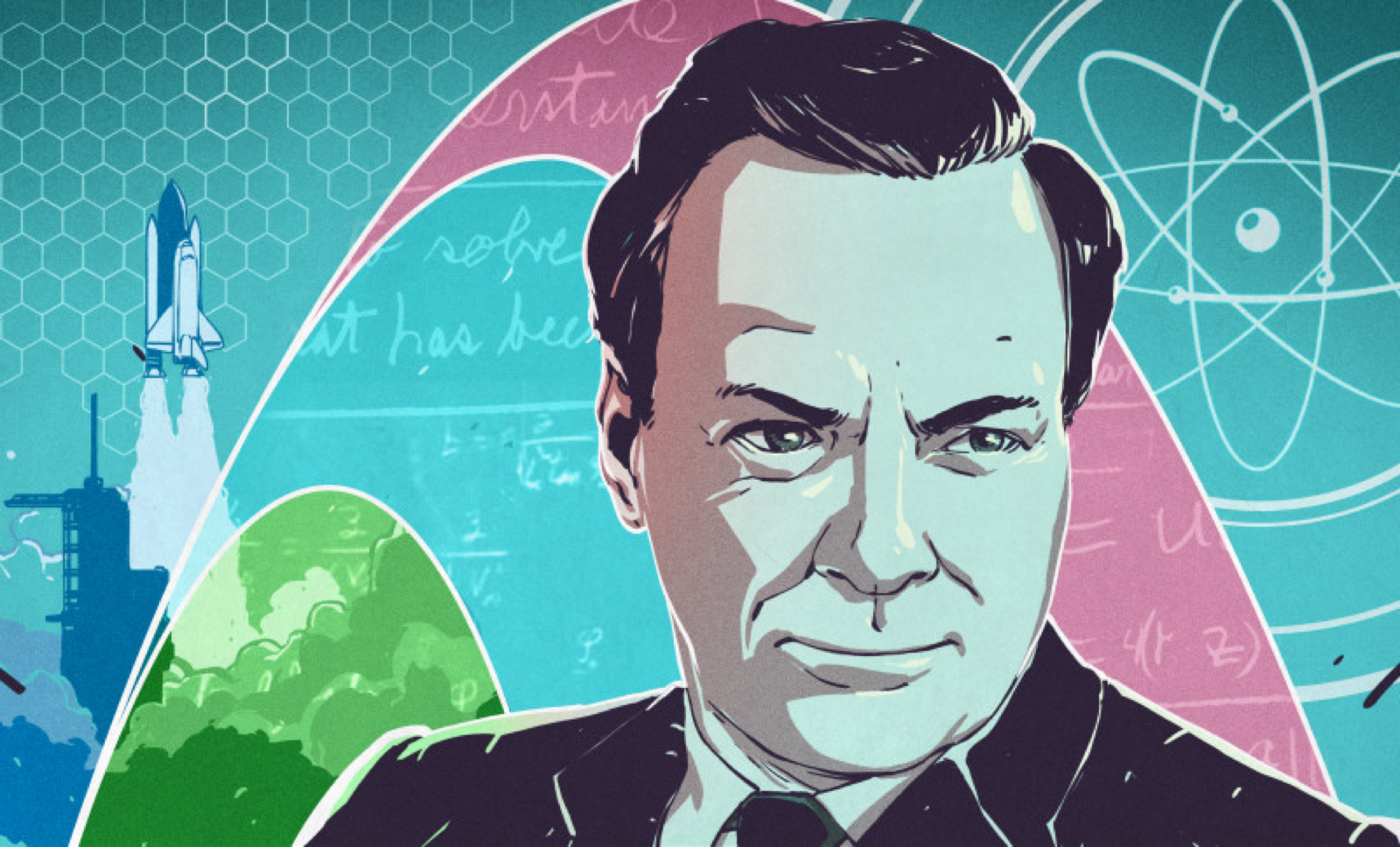 It’s a well-known paradox that the most brilliant minds are often mediocre teachers. With decades sculpting advanced mental models, experts typically find it difficult to simplify their knowledge. As a result, it’s quite rare to find renowned experts, let alone polymaths, that successfully crossed the chasm to exceedingly successful teachers.

The greatest historical example of a polymath equally famous for his accomplishments as well as his teachings is undoubtedly Aristotle. A second, less well-known but equally impressive physicist, teacher & writer is one Richard Feynman. Arguably one of the greatest physicists of the last century, Feynman’s accomplishments spanned far across multiple disciplines; his scientific & technical breakthroughs, only compounded by the fact that he was able to distill them for the average layman. Demonstrating a clear mastery of many topics, Richard Feynman, though not as popular as contenders Da Vinci & Franklin, is worth a closer look. Maintaining the same theme as previous entries in this series, we ask — what was he like in his twenties?

The son of a Jewish homemaker & a Belarusian immigrant salesman, Richard Feynman was born in 1918 in none other than Queens, New York. Even though it was clear at an early age that Feynman possessed a heightened sense of intelligence, evident by his tinkering with electronics & self-teaching of advanced math, he led a relatively normal childhood.

Considering himself a “devout atheist” in his teens, upon applying to colleges, he faced brutal antisemitism nonetheless. As a son of New York, his goal was set on Columbia University. Unfortunately, they responded callously that “they had hit their Jew quota for the incoming year.” Thankfully for M.I.T, Feynman opted out of waiting around & emerged himself deeply into its burgeoning STEM culture.

An identifiable intellectual force as early as 1938, the year he turned twenty, undergraduate Feynman published not one but two papers in the Physical Review. The former, co-written with his then-mentor Manuel Vallarta, was titled “The Scattering of Cosmic Rays by the Stars of a Galaxy”. The latter, his senior thesis, on “Forces in Molecules” was impressive enough to undergo scientific publication; today, it is known as the Hellmann–Feynman theorem.

In 1939, twenty-one year-old Richard Feynman officially received his bachelor’s degree in physics, but not before leaving behind a handful of accomplishments. First, Feynman was named a prestigious Putnam Fellow, establishing him as one of the best mathematicians in his generation. Second, he attained a perfect score on his physics entrance exam for a graduate program at Princeton University — a feat never before accomplished.

A short two years later, twenty-four year-old Feynman crossed two critical life milestones. First, he formally received a Ph.D. from Princeton in physics. His doctoral thesis, titled “The Principle of Least Action in Quantum Mechanics,” laid the groundwork for key future breakthroughs, including the famed Feynman diagrams. Second, & certainly more telling of the man beyond the science, Feynman married his high school sweetheart, Arline Greenbaum. Despite a contract to not marry until awarded his Ph.D, Greenbaum had been diagnosed with tuberculosis & given two years to live. On June 29, 1942 (before finishing his Ph.D), & witnessed by no one but a pair of strangers, they were married in a city office. Feynman could only kiss Arline on the cheek.

At twenty-five, in 1943, he heard the call. As if hand-picked to join an initiative of superheroes, or in this case, a league of super-geniuses, famed physicist & Manhattan Project recruiter Robert Oppenheimer invited Feynman to help establish the Los Alamos Laboratory. Here, Feynman worked ferociously across a flurry of projects ranging from the Bethe–Feynman formula for calculating the yield of a fission bomb, to establishing a system for using IBM punched cards for computation.

After working alongside the smartest individuals alive for two years, at twenty-seven, Feynman received & accepted a professorship position at Cornell. Unfortunately, a tragedy struck this same year as his beloved Arline passed away — this deeply affected him.

In 1946, at twenty-eight, Feynman was in a bad place. Drafted to the war, at his induction physical he was diagnosed as suffering from mental illness & therefore exempted. The downward spiral was then exacerbated as his father died suddenly in mid-October. At this point, Feynman admits that he is suffering from depression & writes a letter to Arline, signing it: “Please excuse my not mailing this…but I don’t know your new address.” Despite his mental state, however, he was still an academic in hot demand as he was offered professorships from renowned universities, including the Institute for Advanced Study.

For the following four years, 1947–1950, Feynman worked furiously. Undoubtedly driven by a cathartic focus of sorts, he obsessively studied & published a series of quantum theory dissertations. All appearing in the Physical Review, this series of papers revolutionized quantum theory & solidified Feynman, at the young age of thirty-one as one of the greatest physicists alive:

Alas, like those in the series before him, Feynman possessed a few intricacies, quirks & demons.

For one, Feynman held a rebellious streak within. Yet, this rebelliousness stemmed not from some maligned narcissism or a need to rebel-for-rebel’s sake. No, Feynman’s rebelliousness was something light-hearted, something humane. For example, his blatant circumvention of the marriage-clause held in his Ph.D program contract. But in the face of a dying significant other, does this perhaps merit admiration instead of criticism? An additional tale of rebelliousness from his time at the Los Alamos Laboratory, for a few weeks, Feynman obsessed over lock-picking as a hobby. Most certainly against the protocol of a top-secret, government lab, Feynman trolled his colleagues by picking their locks & sometimes inserting additional items to make it seems like a spy had infiltrated. Obviously scolded when found out, Feynman smile & simply claimed that he was bored.

Now taking a darker turn, there are a few rumors from certain historians that occupied Cornell at the same time as Feynman’s professorship, who claim that Feynman slept around with a few of his friend’s wives; particularly those with whom he lodged with. In his own words, Feynman, in Cornell, never found a permanent settlement but rather stayed with friends & colleagues “until these arrangements became sexually volatile.” Additionally, during his professorships at Cornell, it was noted that he both dated undergraduate students & hired prostitutes. With the context that this time-period is immediately after Arline & his father’s deaths, it’s at least understandable that one would act out.

Who was Richard Feynman in his twenties? A brilliant physicist, mathematician, & loving human with an equal zest for life & the pursuit of progress.

Was he accomplished in his twenties? Hard yes. A Putnam Fellow with perfect grad-school exam scores that lectured to intellectual titans Eisenstein & Von Neumann? Yeah, hard to beat those accomplishments.

Yet in his twenties, Feynman hadn’t peaked. It was only very near his thirty’s that his productivity accelerated. And this acceleration was mainly motivated by a dark rage. It was clear that Feynman, while very comfortable with himself the majority of this life, faced a serious personal crisis in his late twenties that’d require a reinvention.

Feynman lived a short life dying at sixty-nine, yet his accomplishments laid a foundation of scientific research for long after. Venerated by physicists around the world, ironically, many of his greatest achievements are often overlooked. It’s his personal traits & skills that really make him unique. Feynman’s whole life was full of challenges: speech impairment, poor grades in writing & the arts, religious discrimination, early deaths (Arline & his father) & even cancer. Yet, he persevered through it all, teaching what he loved & doing work that he loved until they day he died. Rarely succumbing to the negativity in his life, these reasons are what truly make Richard Feynman a polymath worth emulating — an endless sense of hope & inspiration.

The Feynman Lectures On Physics