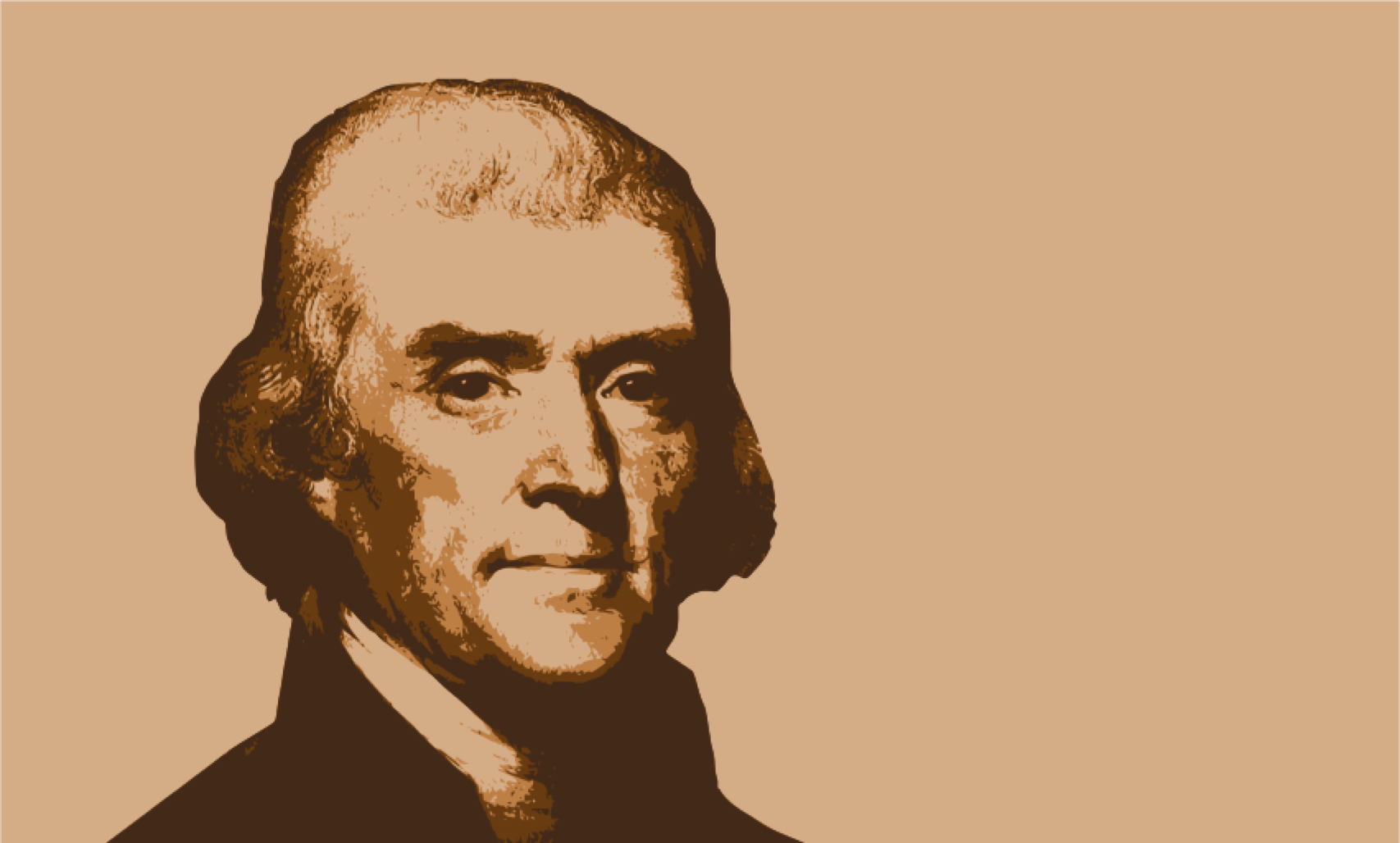 I think this is the most extraordinary collection of talent, of human knowledge, that has ever been gathered together at the White House, with the possible exception of when Thomas Jefferson dined alone.

As revered John F. Kennedy so eloquently puts it in the quote above, Thomas Jefferson, the 3rd POTUS, compiled an astounding vast range of knowledge & accomplishments throughout his life. His biographies often narrowed to his historical role as a Founding Father, Thomas Jefferson is unfortunately overlooked as a candidate for “polymath.” However, since we’re refraining from a strict definition here, it’s certainly incontrovertible that Thomas Jefferson was an expert in many fields.

Our eleventh-entry in our Young Masters series, the ideas of Thomas Jefferson are inked into the very soul of this country. A man at the right place at the right time who courageously walked the path in front of him & led in a time of turbulence, Jefferson is equally-deserving of placement in this group. Maintaining the same focus as previous submissions, we ask again — what was he like in his twenties?

The year he turned twenty, 1763, Jefferson decided to further & complete his legal education by apprenticing (there were no formal legal programs back then) under George Wythe. Between his legal obligations & a variety of other topics he was self-studying(philosophy, history, religion, science), Jefferson worked up to fifteen hours a day, only to then practice the violin for a few more hours afterward.

At twenty-two, while still under the tutelage of Wythe, Jefferson faced a tumultuous family year. A happy occasion — one of his sisters Martha married his close friend & college companion Dabney Carr was unfortunately contrasted with a great tragedy, in which his other sister, Jane, died unexpectedly at the young age of twenty-five.

In 1767, the year he turned twenty-four, Jefferson concluded his studies with George Wythe, was admitted to the Virginia Bar, & moved back to Shadwell, Virginia. Here, he started taking cases for the General Court of Virginia; among these were notable cases: Howell v. Netherland & Bolling v. Bolling.

At twenty-five, in 1768, Jefferson begins proving his potential as a future leader. First, in a now-famous moment, Jefferson took seven cases for freedom-seeking slaves & even waived his fee for one client. During his arguments, he invoked the Natural Law to argue:

Everyone Comes Into The World With A Right To His Own Person And Using It At His Own Will … This Is What Is Called Personal Liberty, And Is Given Him By The Author Of Nature, Because It Is Necessary For His Own Sustenance

Unfortunately, the argument failed & the judge ruled against Jefferson; however, it’s very clear that the quote above is a direct foreshadow to one of the most recognized lines in the Declaration of Independence (“All Men Are Created Equal”). Just the right amount of rebellious, Jefferson, lost but not defeated, gave his client some money anyways to aid his escape. This same year is elected to the Virginia House of Burgesses & quickly allies himself with the young “radical faction” led by George Washington & Patrick Henry. Around the same time, Jefferson begins leveling a mountaintop to begin construction on an estate that he designed (Monticello).

After a flurry of a professional year, Jefferson & his family experienced another light-tragedy in 1770. The year he turned twenty-seven, his original place of birth & childhood, the Jefferson family estate in Shadwell, burned down. This forced construction at Monticello to accelerate; despondent with the value of lost items, Jefferson dedicated a good part of this year to finding volumes of books to replace his library. By the end of the year, his personal library at Monticello approximated ~1500 books, for reference, there were only about ~6000 books in circulation in the entire library system.

The penultimate entry in this focused account, twenty-nine year-old Jefferson married his third cousin, Martha Wayles Skelton. According to biographers, it’s a profoundly healthy marriage that’s described as the happiest period of his life.

Was Thomas Jefferson without his flaws? By this time in the series, we know that the answer to this is a resounding no. As we’ve seen time & time again, one’s greatest strengths can quickly turn into one’s greatest weakness.

While at times an empathic-leader that wielded logic to advance his humanitarian philosophies of liberty & the individual right; at other times, he was a callous calculator that wielded logic to advance his singular, selfish financial needs. For the uninitiated, there’s one glaring inconsistency in Jefferson’s timeline that deserves a deeper introspection: his oscillating thoughts & behaviors towards slavery.

Slavery was a contradictory issue in Jefferson’s life. Although he was an advocate for individual liberty & at one point promoted a plan for gradual emancipation of slaves in America, he owned slaves throughout his life. Additionally, while he wrote in the Declaration of Independence that “all men are created equal,” he believed African Americans were biologically inferior to whites. As the son of a well-off family, Jefferson inherited some 175 slaves from his father, which only a small number of them he freed in his will; the majority were sold following his death. While he’s usually presented as a champion of emancipation, abolitionist historian Moncure Conway presents an alternative argument:

“Never did a man achieve more fame for what he did not do.”

While in his earlier years he was more or less consistent in his views towards eventual emancipation, a critical turning point in Jefferson’s thinking is readily identifiable through a financial analysis he wrote in his personal notes.

Sometime in the early 1790s, Jefferson was counting up the agricultural profits & losses of his plantation when it occurred to him that there was a phenomenon he had perceived at Monticello but never actually measured. He proceeded to calculate in a barely legible, scribbled note in the middle of a page, exactly what the financial gain of slavery was. Jefferson measured, for the first time, that he was predictably yielding a 4% profit every year on the birth of black children.

Taking this asinine analysis a step further, in other records from the early 1790s, Jefferson quite bluntly advances the notion that slavery presented an investment strategy for the future. He writes to a poor acquaintance that he:

Perhaps a comforting irony, Jefferson sent his slave formula to George Washington, who found the formula particularly inhumane & disgusting; in turn, he freed his own slaves, precisely because slavery had made human beings into money, like “cattle in the market.”

Who Was Thomas Jefferson In His 20s? A diligent & ambitious legislative leader who didn’t shy away from dirtying his hands in engineering work.

Was He Accomplished In His 20s? Not particularly so. He certainly had a knack for networking with equally-talented individuals; and yes, he was elected into the Virginia House of Burgesses. But that’s about it — which is arguably moderately accomplished at best.

The main difference between Thomas Jefferson & many others in this series is quite clearly the timing. As Shakespeare so eloquently put it:

Some Are Born Great, Some Achieve Greatness, And Some Have Greatness Thrust Upon Them

Jefferson, incontrovertibly, had greatness thrust upon him. And while this implicitly implies a sense of luck, there’s nonetheless something deeply admirable in mortals that achieve immortality simply by courageously walking the path set before them. Sometimes history calls upon you, but it’s on you & only you to accept the call.