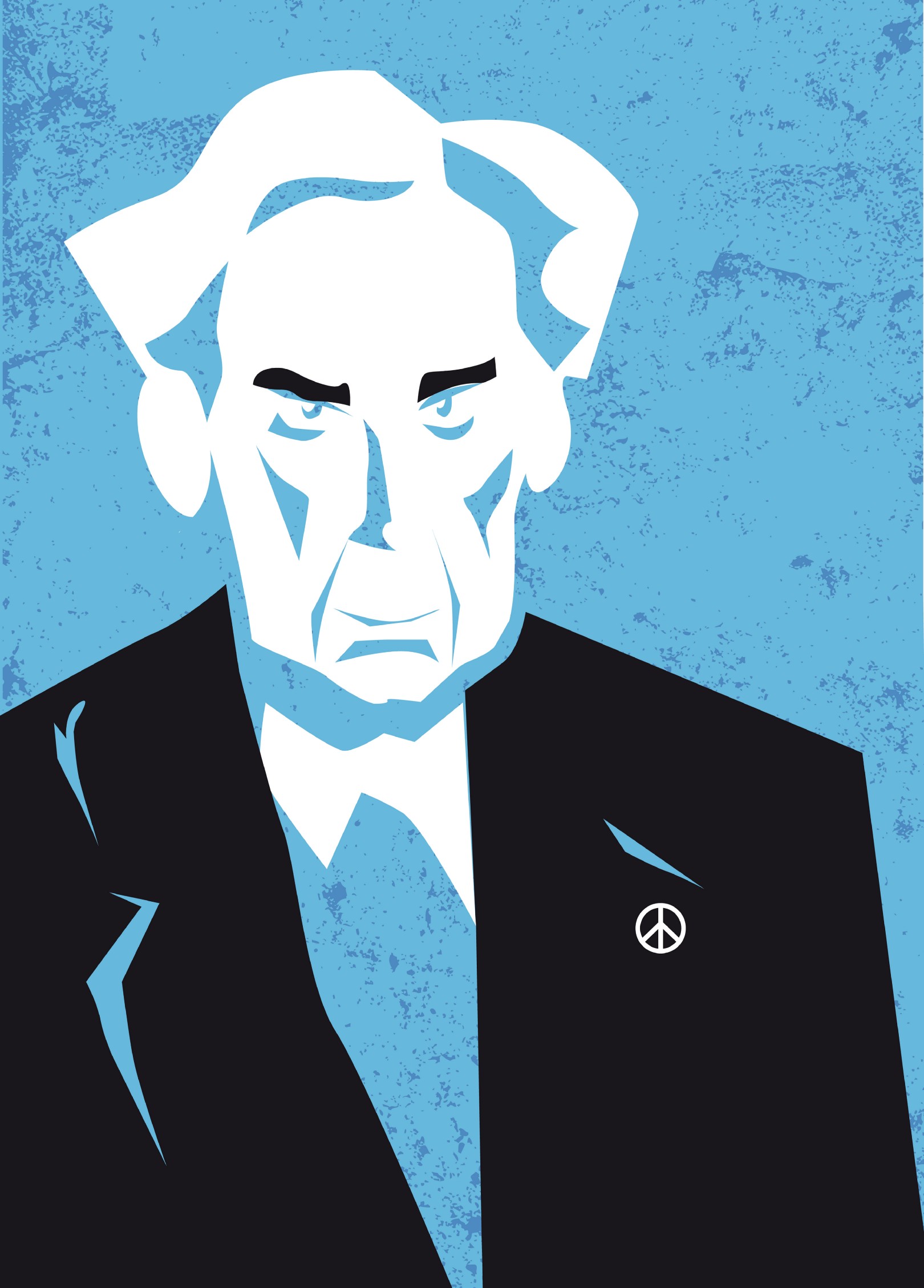 The second entry in this Masters of Many series, perhaps one of the most important thinkers of the 20th century, is none other than Bertrand Russell. A Nobel Prize-winning writer, extraordinary philosopher, revolutionary mathematician & social activist, he undoubtedly exemplifies the DNA of a true polymath.

Leading an unfathomably productive & turbulent, long life, Bertrand often found himself on opposite sides of the spectrum in terms of public appearance: at times the champion of the people, & at other times scorned by the public & outright jailed for his beliefs. His legacy as one of the most important intellectuals in modern times, however, cannot be denied. As Einstein himself commented on Russell:

As previously expanded on with the previous Benjamin Franklin piece, the existential focus of this mini-biography is to answer the question: what was he like in his twenties?

— One of the most influential Western philosophers of all time, publishing key pieces like A History of Western Philosophy & The Problems of Philosophy

— Accomplished mathematician, particularly in the field of logic which he evolved with his timeless Principia Matematica

Prior to his twentieth birthday, Russell’s life was already marked with extreme emotional turbulence. Yes, he was born into a rather privileged, wealthy, aristocratic family that opened multiple doors throughout his life. However, as we’ll expand on later below, this privileged upbringing likely meant little considering the multiple, horrifyingly-tragic life events he endured in his childhood. Mainly, the deaths of many immediate family members. At the age of four (1874), his sister & mother passed away. Less than two years later, his father died too — so he was sent to live with his paternal grandparents, the former Prime Minister Earl Russell & his wife, the Countess Russell. Another two short years later, his grandfather died, again leaving an eight-year-old Bertrand without a fatherly figure. While a gregarious Franklin’s pre-20’s were marked by experimenting, exploring, & very much wander-lusting, our hero journey this time around starts with one introverted, mourning Bertrand — to whom learning provided the single light in his life.

Bertrand turned twenty in the year 1892. In a startling similarity to Franklin (who joined the Freemasons at a young age), Bertrand, in his second year at Trinity College, was elected to the famous (or infamous, depending on your perspective & the time period covered) Apostles. Founded in 1820, the Apostles is a small, informal society that regards itself as the intellectual cream of Cambridge University. A double-major in mathematics & philosophy, with first honors in the former, in 1893, he decided to continue his studies as a Fellow in the latter (specifically on the philosophy of non-Euclidian geometry).

The following year was relatively tranquil, except in the last month of 1894, when he married one Alys Pearsall Smith — much to his Grandmother’s disapproval. Now aged twenty-three in 1895, he spent the majority of the year abroad, attending lectures on German social democracy.

Officially kicking off his career as a lifelong author of math, philosophy, & social matters, Russell published his first essay in 1896: The Logic of Geometry. This same year, he spent the last quarter of the year abroad in the United States (worth noting here that both Franklin & Russell traveled extensively in their 20s). He culminated the year, aged twenty-four, with a second publication: German Social Democracy.

At the mid-age of twenty-five, he put forth his largest essay to-date: An Essay On The Foundations Of Geometry. As his official thesis, Russell undoubtedly displayed his piece with youthful pride; later, however, he consistently repudiated it as fundamentally flawed:

Apart from details, I do not think that there is anything valid in this early book.

Additionally, he also published a review on the then-groundbreaking mathematical branch of set theory: Review of Couturat. This same year, 1897, he begins breaking with the leading, contemporary philosophical principle of his time: idealism.

The following year, 1898 was marked by two rather large life adjustments. First, his dear, beloved grandmother (Countess Russell) passed away early in the year — no doubt a huge sting to the man that she single-handedly raised since the age of four. Next, he, along with famous philosopher G.E Moore, finally broke with idealism, setting the path for their adoption of realism (a common topic that’d surface in his philosophical writings for coming decades). Once again he spent a handful of months aboard, spreading his time between Italy, Germany & France.

Now twenty-seven, Bertrand continued to expand his three-tiered knowledge-base. First, he spent a semester lecturing at his alma mater on Gottfriend Wilhelm Leibniz, another historically-significant polymath that coincidentally (or maybe not), also balanced mathematics & philosophy. Next, he published a review of one Alexius Meinong’s Über die Bedeutung des Weber'schen Gesetzes. Later in the year, he defends his thesis (though begins to admit internally it’s many flaws) by publishing a response to Henri Poincare’s criticism. Last, he spent a handful of months diving deeply, once again, into Cantorian set theory.

The turn of the century, the year 1900, twenty-eight year-old Russell’s obsession with set theory fully blossomed & pushed his intellectual curiosity into overdrive. Now an attendant at both the International Congress of Philosophy & the International Congress of Mathematics, it was in the latter that he met Giuseppe Peano, one of the original founders of set theory. Immediately intrigued, he compiles & devours all of Peano’s publications & rough-drafts on set theory. Near the fall he publishes an expository on his previous lecturing-material: A Critical Exposition of the Philosophy of Leibniz. Additionally, he finished the first draft for one of his more famous mathematical works, “The Principles of Mathematics.” Towards the end of the year, he begins to identify possible paradoxes in set theory, however, he remains silent on the matter except to Alfred North Whitehead.

The following year, a twenty-nine year-old Bertrand accelerated his pace of productivity in one field (mathematics), while also becoming deeply inspired to begin authoring essays & books on a second topic: the humanities (primarily peace & agnosticism/atheism). In contrast to previous years of introverted efforts, this year also marked one of professional companionship; he spent the majority of the year collaborating with Whitehead, together putting forth two important mathematical papers: “Finite & Infinite Cardinal Numbers” & “Logic of Relations.” Interestingly enough, according to Bertrand’s autobiography, it was the relationship with Whitehead that sparked his feverish interest in authoring essays & books on humanity. While watching Whitehead’s wife suffering from an angina attack, he found himself:

filled with semi-mystical feelings about beauty…and with a desire almost as profound as that of the Buddha to find some philosophy which should make human life endurable — at the end of those five minutes, I had become a completely different person.

The closing year of this mini-series, 1902, the year Bertrand turned thirty, he expressed two main discoveries — one internal & one academic.

First, he acknowledged that he was not at all happy in his marriages to Alys (the first of many personal relationships that’d deteriorate over time). Second, he finally, fully identified the great paradox in set theory (today known as Russell’s Paradox). This second finding helped round out his first major, historically-significant mathematical publication that he’d publish early in the next year: The Principles of Mathematics.

Onto the less-spoken of negative characteristics that remind us that these Masters of Many, like all of us, are far from perfect. Again, there is no such thing as absolute morality — even one of the most important logicians & philosophers in history fails to rationalize away all his actions. Like Franklin, he struggled to maintain single, faithful marriage; throughout his life he had multiple affairs & marriages. Unlike Franklin, however, Bertrand dealt with quite serious mental health issues early on. Additionally, while Franklin reluctantly & eventually took part in the young colonies great separation, Bertrand’s attitude towards global conflicts & wars, mainly outright resistance & rejection, were markedly more pronounced — leaving our hero cast away from his alma mater (temporarily) as well as flat-out jailed.

His first marriage with Alys Pearsall Smith, the American Quaker five years his senior, lasted fewer than five years before he realized he no longer loved her, which led Russell to turn to infidelity. The callousness only extended one-way: Alys remained deeply in love with Russell for the rest of her life. Russell, on the other hand, displayed cold apathy towards her during & after their marriage — a rare contradiction for the man who’d go on to champion philosophies of peace & anti-imperialism. He’d go on to marry an additional three times for a total of four marriages.

Next, we’ll travel back to before Bertrand’s twenties, during the childhood plagued by multiple, familial deaths. In order to kick-off this mini-series appropriately, we skipped over the real depths of his introversion, misery, & depression in his childhood. It’s likely near-impossible to paint the darkness he perceived in his early years. To give an idea, however, we can glance to his auto-biography, where Russell himself expands on harboring strong & consistent feelings of suicide:

There was a footpath leading across fields to New Southgate, and I used to go there alone to watch the sunset and contemplate suicide. I did not, however, commit suicide, because I wished to know more of mathematics.

As mentioned in the subtitle, paragraphs above, & his direct quote, it’s no exaggeration that Bertrand regarded continuous learning (particularly about math & philosophy), as one of the most important endeavors an individual can undertake. Marred by suicidal thoughts early-on, it’s sincerely inspiring to witness his blossoming spirit as he aged — demonstrating ever-increasing happiness & appreciation for life.

Last but not least, Bertrand championed worldviews that were quite contrarian given their time period. This, unfortunately, did not always sit well with those in power. At the start of World War I, within a few days of the UK officially joining, he immediately engaged in pacifist activities & protests — as a Fellow lecturer at Trinity College without tenure, he was dismissed for this stance. Not one to bow down to anyone or anything but his own truths, he continued to protest what he perceived as an unnecessary & interventionist effort; a short year later, he strongly campaigned against the USA entering the war & was subsequently jailed for six months. Much later in his life, circa 1961, at the age of 89, Russell was again jailed for his beliefs, this time after taking part in anti-nuclear protests. Now a world-renowned figure & frail elder, the magistrate (court judge) during the trial offered to exempt him from jail if he pledged himself to “good behavior”, Bertrand simply replied: “No, I won’t.”

Who was Bertrand Russell in his twenties? An extremely brilliant individual with tremendous personal conviction & an insatiable hunger for knowledge.

Was he accomplished in his twenties? Soft yes. He breezed through the typical high-level education path through his mid-years; the latter years, however, demonstrate a pace of learning, writing & discovering that would only increase over time.

A champion of both rational & humanity subjects, he’s a fascinatingly complex character that highlights a ferociously individual mindset. In today’s age of massive group-think, his presence reminds us to not allow powerful or political opinions & laws triumph over personal values — particularly if those values are derived from careful analysis. And never stop learning.

A Journey Through 20th Century Philosophy