The Original Renaissance Man & Master of Many 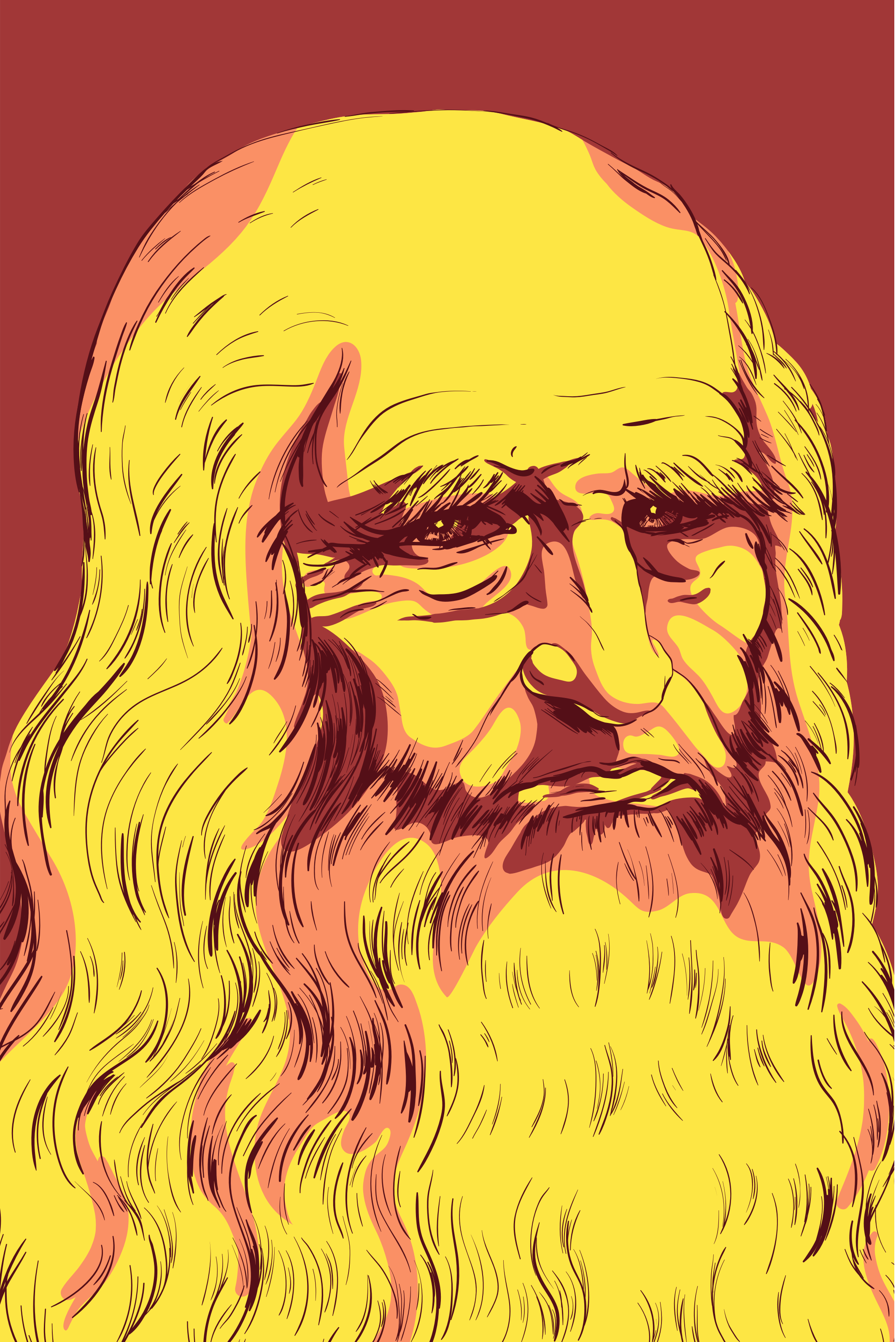 It’s only appropriate that the third submission to this Masters of Many series lands on the 500th anniversary-month since his passing. Known for his feverishly inventive imagination & unquenchable curiosity, the original Renaissance man, Leonardo Da Vinci, is consistently revered as one of the most important & creative minds of all time.

Arguably the greatest painter to have ever lived, his lifetime accomplishments spanned far across multiple disciplines. From military inventions, to anatomical observations, to sketching utopias, Leonardo Da Vinci sets the bar for polymaths. In this mini-series, we previously explored Benjamin Franklin & Bertrand Russel’s formative years. We’ll maintain that same focus by zoning in on a specific time-period of Leonardo Da Vinci’s life — what was he like in his twenties?

— One of the greatest painters of all time, his portfolio contains multiple, timeless works such as Mona Lisa, Last Supper, Vitruvian Man, Virgin of the Rocks & Salvator Mundi

— Extraordinarily innovative military engineer that sketched out a plethora of inventions that’d eventually see the light of day such as a tank, a multi-barrel gun, a giant crossbow, a helicopter, & a parachute

— Wide-spanning scientist that made serious contributions to the fields of optics, botany, cosmology, & hydrology

Da Vinci was identified to possess great artistic talent early on in life. This is evident by the apprenticeship he gained on his fourteenth birthday. Spending the majority of his childhood in Vinci, a territory that lay in a valley in modern-day Florence, at fourteen he moved to the city in order to work directly underneath one Andrea del Verrocchio. An artistic legend in his own right, Verrocchio’s studio was likely one of the best possible learning opportunities for any young artist in that time-period. Though Verrocchio was the best painter in Florence, his studio offered a far wider education — other famous figures that stepped through the studio & rubbed shoulders with a young Leonardo are Domenico Ghirlandaio, Pietro Perugino, Sandro Botticelli & Lorenzo di Credi. With access to such diverse technical talent & theoretical principles, its little surprise that Leonardo learned picked up multiple disciplines such as drafting, carpentry, drawing, painting, sculpting, & modeling.

It’s widely-known that Verrocchio, as the master of the studio, often let various of his apprentices & assistants contribute to his commissioned work. As history dictates, from the type of brushstrokes & attention to light, Leonardo’s influence is seen in at least one of Verrocchio’s pieces — The Annunciation, in particular, is often quoted as the first “work” by Da Vinci:

Da Vinci turned twenty in the year 1472. This kick-off year is marked by two large life events. First, after a total of seven years, Leonardo finally left Verrocchio’s studio with his father setting up his own workshop; however, he quickly realized that he much preferred the lively corroboration that Verrochio’s studio offered & returned before the year ended. Second, based on his work under Verrocchio, he was asked to join the Painter’s Guild of Florence. In most of Europe, ever since the expansion of towns & cities, crafts & professions had been governed by local bodies known as guilds. Essentially city-wide unions, these associations controlled trade, limited outside competition, established standards of quality, & set rules for the training of apprentices. Membership was usually compulsory — only guild members could practice their trades within a city & its territory. Rarely were such young members invited, which points to the degree that his artistic talent showcased.

The next year, at twenty-one, he publishes his first, official, original (though not commissioned) work. Dated August 5th, 1473, Leonardo drew a landscape depicting the valley of the Arno & Monteloupo Castle:

At twenty-two, in 1474, he received his very first commission for a portraiture for one, 16-year-old Ginevra Benci. While the patron is shrouded in undecided history, guesses range from her betrothed Luigi Niccolini, to her admirers, one of whom was the aristocratic Lorenzo de’Medici, part of the elite Medici family.

The next year, 1475, Da Vinci likely started multiple individual projects that would be later released, however, it’s impossible to determine exactly which paintings were started. It is confirmed, however, that this is the year that he & Verrocchio finished The Baptism of Christ.

The following year, 1476, twenty-three year-old Da Vinci suffered quite a personal & public embarrassment. Just on the cusp of becoming a master in his own right, he was suddenly plagued by a scandal: Da Vinci, along with three other young men, was anonymously accused of sodomy (still a criminal offense in Florence). The accusation was particularly embarrassing for Da Vinci because his charge was with one Jacopo Saltarelli, a notorious prostitute.

Five years of deep despair, isolation, commercial failure & unfinished works followed. For the next two years immediately following the charges, 1477 & 1478, almost nothing is known of twenty-four & twenty-five year-old Leonardo. Neither whereabouts or his works in progress— only that he intermittently popped into Verrocchio’s studio.

During the following three years afterward, Da Vinci again went out on his own; only to, once again, fail commercially. Due to his growing renown, he at least managed to receive a total of three commissions, yet he failed to complete a single one. He started two commissions, leaving them unfinished, then flat out ignored his third commission. Nevertheless, one of the two unfinished commissions, The Adoration of the Magi, despite its lack of completion, propelled a twenty-eight year-old Da Vinci’s reputation forward as a generational artistic talent:

In 1482, Leonardo created a silver lyre in the shape of a horse’s head. The local aristocracy, Lorenzo de’ Medici, saw an opportunity here to rekindle a strained relationship by sending Leonardo to Milan, bearing the lyre as a gift, to secure peace with Ludovico Sforza, Duke of Milan. In a rather uncharacteristic & unorthodox tactic, Leonardo also saw an opportunity here to leave his hometown & escape his perceived maligned reputation by seeking employment with the recipient of the message. Along with the lyre, Leonardo delivered a hand-written letter claiming an extraordinary & diverse skillset, some of which he very clearly had no prior experience in. A few of these outlandish claims are:

…I have methods for destroying every rock or other fortress, even if it were founded on a rock.

I have mortars..that can fling small stones almost resembling a storm; & with the smoke of these causing great terror to the enemy

And when the fight should be at sea I have many machines most efficient for offence & defence; & vessels which will resist the attack of the largest guns

While it’s entirely possible that Leonardo had sketched many of these inventions out, or even considered them in thought experiments, it was really out of the blue for him to hyperbolize so greatly. It was also quite gusty to challenge the credibility of the claims by ending the note with:

If any one of the above-named things seem to any one to be impossible or not feasible, I am most ready to make the experiment in your park, or in whatever place may please your Excellency

Perhaps aiming to kill two birds with one stone by both moving locations & re-setting his career as artist-engineer instead of a painter, Leonardo’s risky play worked: twenty-nine year-old Da Vinci was en-route to Milan as the official “Painter & Engineer of the Duke.”

The closing year of this mini-series, at thirty, our protagonist engages in his first commission in Milan: the Virgin of the Rocks. Like his previous commissions, however, this particular project dragged on for twenty-five years before he collected payment, resulting in two different final versions.

Once again we reach the point in this series where the rubber meets the road: just how infallible are these seemingly-perfect polymaths?

Quirk-wise, it’s worth nothing Leonardo Da Vinci lived out one personality trait above all: curiosity. As noted from his journal & observations, Da Vinci simply fed this unquenchable curiosity his entire life — which is easy to assign as critical in his path towards universal genius. One of the oft-quoted best examples of his curiosity is a self-written note to study a particular subject of intrigue:

Describe the tongue of a woodpecker

Like Bertrand Russell, Leonardo undoubtedly waded in the dark side of his emotions & psyche throughout his life (though never out-right suicidal). Unlike Benjamin Franklin, Leonardo was a disaster with his personal finances & almost equally irresponsible with his commercial commitments.

As evident by the personal turmoil caused during the sodomy charges, Leonardo, at times, flipped from his gregarious self to an isolated creative marked with depression, misery & guilt. Another such moment occurred when he was crushed by Michelangelo in a battle of the artistic geniuses, quitting before the competition even began.

Apart from slight & intermittent mental health & emotional disturbances, Leonardo Da Vinci was absolutely abysmal when it came to either his personal finances or his commercial commitments. Count the track-record above — just within this ten-year summary he literally only delivered a single, out of a total of five commissions. Ask any freelancer, leaving project scopes incomplete means diving-headfirst into Pandora’s box — it obviously makes collecting payment & achieving financial stability laughably impossible. Thankfully, Da Vinci’s ever-growing network, particularly in high-class circles, provided him with room & board. He experienced a wealthy lifestyle even though he did not have much personal wealth. If he displayed that same apathy towards commitments in today’s hyper-critical & reputational-based social media space, it’s highly likely that he would’ve been shamed & perhaps never contracted for commissions again.

Who was Leonardo Da Vinci in his twenties? An extraordinarily talented painter with a feverish curiosity on the cusp of vastly expanding his repertoire.

Was he accomplished in his twenties? Undoubtedly, but with a caveat. While he was brimming with talent during these formative years, it’s hard to say he “accomplished” much in terms of completing commissions or commercially managing his own studio.

In fact, looking at just this time period, with the exception of the audacious letter he wrote to the Duke of Milan, Leonardo Da Vinci was quite one-dimensional. He held extraordinary talent as a painter & displayed great potential in other endeavors, but nothing more. In his twenties, the Renaissance Man was far from the universal genius he’d grow into — so don’t worry about diversifying your skillsets this early on. It’s much more critical to achieve dominance in one area during these years, & then apply those mental models to additional skillsets afterward.