The 19th-Century Queen of Science 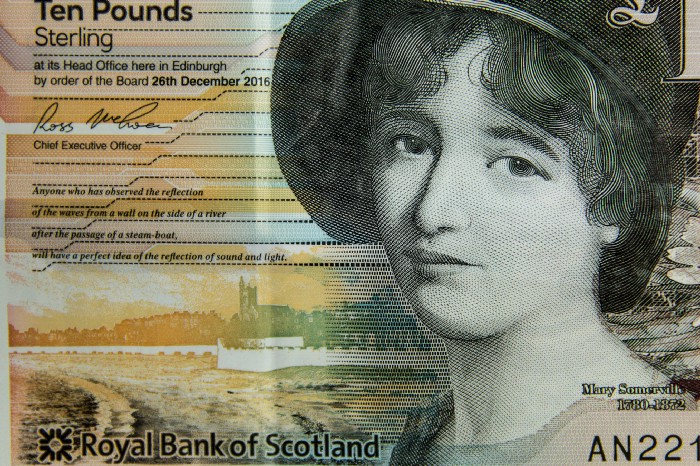 Whatever difficulty we might experience in the middle of the 19th century in choosing a king of science, there could be no question whatever as to the queen

It’s often said that true mastery of a complicated subject is best marked by the ability to succinctly & clearly explain said subject. If that’s the standard, then there’s little doubt that Mary Somerville, the 19th-century Queen of Science, earned her spot in this series as polymath among the likes of Young, Russell, Da Vinci, & Franklin.

As a natural mathematician, diverse scientist, & eminent writer, her influential works synthesized many different scientific disciplines for the mainstream. A distinct determination to self-educate, paired with a ferocious period of productivity led to Somerville attaining much recognition throughout her life; as evident by the ten-pound RBS denomination above, her contributions & influence as an early woman polymath are hard to overstate.

—Popularized many branches of science such as astronomy, botany, & geography through her multiple, internationally praised books such as Mechanism of the Heavens & The Connection of the Physical Sciences.

—Translated & expanded one of the most important mathematical publications of her generation: LaPlace’s Mecanique Celeste.

As a child, Mary had minimal access to education. Taught to read but not write, she formally attended boarding school at the age of ten for a single year. The return trip home, however, marked the beginning of her life-long self-educating journey.

The proverbial cherry-on-top of her academic challenges: only a single relative, her uncle, Thomas Somerville, supported her self-education, Every other member of her family actively dissuaded her from learning as they believed it corrupted the female complexity (or some equally misogynistic belief).

Unfortunately, Somerville herself leaves out a huge gap of her history in her autobiography; additionally, it seems that no other historian has managed to fill in this gap. Other than her place of residence, very little is known of Mary Somerville from age seventeen to twenty-three.

In 1804, at twenty-four, Mary married a cousin, Samuel Greig , a captain in the Russian navy & the Russian consul in London. As early as the following year, however, it was clear that Mary wasn’t happy. Deciding to seriously self-study mathematics at the age of twenty-five, Somerville leaves behind that “although my husband did not prevent me from studying, I was met with no sympathy whatever from him, as he had a very low opinion of the capacity of my sex.”

At twenty-seven (1807), her husband Greig passed away, which stands as an inflection point in Mary’s journey for two reasons. First, she was finally free of parental or authority figures, which freed her spirit to pursue her passion as she no longer entertained other’s judgment. Second, with Greig’s estate, she was now also financially independent; with her spirit & time fully available, Somerville shattered her figurative chains.

With affairs in order & a purpose redefined, twenty-eight year-old Mary set out to tackle “the big one” — Isaac Newton’s Principia. A brief year into a concentrated effort to self-study mathematics, Mary, confident in her ability relative to academics & proven autodidacts, began sharing notes with the upper echelon of mathematicians. At twenty-nine, correspondence with one William Wallace, another self-taught prodigy that was then editor of a mathematical journal & later Professor of Mathematics at the University of Edinburgh, convinced her to attempt her hand at publish-worthy, prestigious, unsolved problems.

In 1811, at age thirty, she was awarded a silver medal for her solution to one of these outstanding problems, specifically a Diophantine problem; the first of many awards for her nonfiction publications.

As we’ve learned from previous submissions, people with phenomenal strengths are often balanced out with extraordinary weaknesses. Whether it’s Da Vinci’s astounding apathy towards financial commitments or Franklin’s surprising callousness towards his own son, negative characteristics exist — no one is infallible. So we ask, where is the darkness in Mary Somerville’s timeline?

Unfortunately (or fortunately), I failed to find any instance of a quirk, controversy, or scandal perpetrated by Somerville. There does exist, however, a self-admitted note of regret. In her autobiography, Mary details anguish when reflecting how she chose to spend her thirties & forties; specifically, she lamented the choice to study & popularize a plethora of scientific topics, as opposed to harnessing her focus on a single effort: original mathematics work & research. Apparently, the great debate of attaining expertise in a single niche, versus expanding one’s repertoire as a jack-of-all trades, is hardly a modern dilemma.

Not that this should count as anything against Mary, it’s simply an eyebrow-raising observation that in this series of Masters of Many, she’s the first protagonist to express regret upon her skill set being too diverse.

Who was Mary Somerville in her twenties? A rebellious autodidact that refused to allow her context to define her self-worth & potential; a brilliant scientist with a growing-grasp on a wide-breadth of subjects & an equally-impressive ability to simplify & communicate such topics.

Was she accomplished in her twenties? An empathetic no, though her late twenties laid a path for imminent accomplishments in her early thirties. While others in this series received lifelong support in their academic & artistic endeavors, Mary, due to the many glass ceilings placed by many throughout her life, spent the majority of her twenties finding & defining herself.

While Mary’s accomplishments fall short relative to the four other subjects of this series, it’s crucial that we review her history with a key topic in mind: the expected role of women in the 19th century. With this background, two of her accomplishments shine brighter. First, her very real, pure, command of many scientific branches — akin to the prodigy Thomas Young. Young was intellectually pampered since his earliest memory, while Mary fought a lifelong uphill battle for academic support. Second, perhaps more importantly, is her sheer courage & refusal to accommodate to society’s standards. Like Da Vinci embracing his true-self by outwardly expressing his homosexuality, perhaps one of Mary’s greatest accomplishments is the influence she left behind for future women polymaths. Authenticity, a commitment to one’s true-self, is a value aptly captured by Mary Somerville’s journey & conquest as the 19th-century Queen of science.